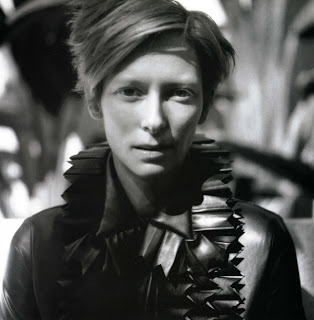 Tilda Swinton is picking at the corpse of this year’s parade.
They have one every year here. The village is old, and the traditions follow, where by ancient folklore most of the village breakfast wetly in the Supreme Being & Templar to sit till lunch in modern pantomime finery laughing and shouting and throwing stones at crows. Tractors and drays pull carts whose wheels drop half the local farm in clods along the road, taking the children to the green to the sound of Lady Gaga. Three men without any sense of irony are blacked-up. One has lost his trousers. A woman left outside the pub cackles, crouched, knickers about her shoes, heels in a puddle of her own piss. Someone is a Spice Girl, he doesn’t seem sure as to which. And where a Rover drove into Michael Praed’s wall the engine is still turning whilst Tilda Swinton picks at a brain that just won’t be missed. There’s ignorance and anger all sticky about her chin.
It’s dreadful, awful, embarrassing and it will only get worse because those floats that have made the green are a part of the fair whose travelling stalls and too-bright lights won’t be missed. People throw wonky darts for prizes they don’t want. The lucky dip isn’t; everyone a winner and every winning a Meercat dolly given out free with online insurance, knocked off, nibbled at, but with a catchphrase. The head of Leslie Philips is pecked at by goldfish. Terry Thomas bloody but exhilarated sneers at the body; there can be only one.
There’ll be candyfloss and tasteless doughy buns for tea, the last hiding a single tinned frankfurter, both wet.
I’m locking the doors and closing the curtains.
Because today Tilda Swinton is picking at the corpse of this year’s parade.
Posted by Alan at Saturday, July 21, 2012
Email ThisBlogThis!Share to TwitterShare to FacebookShare to Pinterest