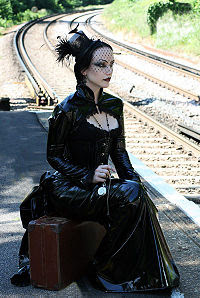 Bring me another train, this one is not steam punk enough

Everyone has a computer, there are console games in every home. Everyone knows what a hobbit is, and films with the Hulk in top the box office chart. Every other person on the street has tattoos; most young blokes have their hair spiked up to one degree or another and still the next go-to trouser after jeans are revamped army trousers. If the nerd spirit hasn’t entirely taken over the land then only because the punky greebo one still remains – albeit grown up and marketing itself most successfully.

It doesn’t seem so very long ago that but a few were concerned about the environment and most of all festivals are now corporate events supported in the thousands, the millions even, each year.
It’s all very well to say that the young today were our kids the day before but weren’t computers, Segas, and comics the preserve then of the thinking-youth? I’m pretty sure I don’t remember so very many of us (relatively speaking) going to festivals and keeping warm in army-surplus – hell, last year the fashion was for faux army boots and you can still see in the fashionable local shop Motorhead t-shirts for toddlers. It should be a good thing, but worryingly and wrongly I couldn’t help thinking ten years ago that really the queue to see The Fellowship Of The Ring could have been a bit faster for those that knew who the Uruk Hai were.
My pal Desmond thinks it’s great. He also thinks that if you went to Glastonbury in the 1980s tickets should be half price. Or the price of a step ladder. He’s happy that in the end the nerds and the crusties have won, he’s just waiting for the public announcement that anyone never into comics, music, festivals, and video games was officially wrong all along. Mind you Desmond would have it that long-hair has to be registered. Registered now so that when it inevitably comes back into fashion again you can’t have it unless you always did. Desmond notices such things, whereas I don’t. For all I know girls all wear leather jackets, have hoop tights, and DMs. I wouldn’t notice, which would be a crying shame.
But round here it’s not the nerds nor the punks that really won. It’s the fitness lads. Now don’t get me wrong I’d like to be a lot fitter than I am. I’d like to still be running and bunging a ball through a hoop for fun. But I can’t, or won’t, or don’t, but then I don’t wear size XXXXL tracksuits and trainers. The obvious effect of which has been the really sporty folk getting into much, much better sportswear. With really froopy sunglasses. But they’ll be caught up with, albeit only when cornered.
It should of course be all or nothing.
And Desmond wants mainstream culture to really absorb, accept, and de-tooth all sub-pop. Desmond wants people to go the whole hog. He wants to see people in velvet suits and with Robert Smith make-up to match the Robert Smith hair. And really now, wouldn’t we all like to see politicians getting hip with the kids in eye-liner and white pancake?
I’m off to catch Question Time. It’s now a bi-partisan cross-section of political figures all doing their best to be Edward Scissorhands and just like every goth, ever, not quite pulling it off.
Posted by Alan at Tuesday, May 08, 2012
Email ThisBlogThis!Share to TwitterShare to FacebookShare to Pinterest