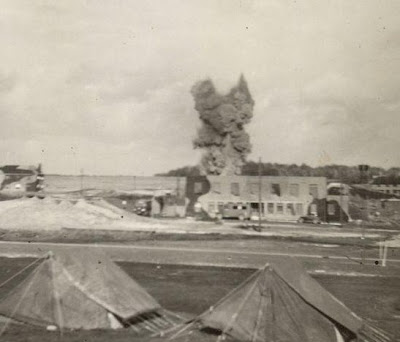 There was this boy at school, something of a bully, who managed to buck the easy by being rather good at lessons. I didn’t think then that he used to steal from the smaller boys or scrap at the slightest look because of his face. It was burned all down one side, the skin oddly plastic, puckered about the jaw, yet he had this tremendous mop of hair that he would push back when he was angry. His mother had died from the doodlebug that had fallen in the garden of their house, and his father had heard the news the day before he had advanced into Monte Casino and not returned. I believe he lived with an aunt, which not unusual then and indeed comparative to these more modern times quite the wholesome family unit. I remember that doodlebug. Or I think I do. Perhaps my mind added it because as I say what I do recall is my mother pushing me away on that sunny day when high above that wub-wub-wub of the jet engine stopped.
Across the old aerodrome the sound of the bomb is tinnitus in my ears. There are grass fires on the edge of the crater where Mme. Roux’s atom bomb Diana (which was you might recall no atom bomb at all) can no longer be seen, and will never now be again. I stand here, rightly stunned. Near everyone in Cecil’s private army was there by Diana in the food queue. Close by a ferret armoured car is on its side. At first I think I can hear laughter but in my muddled state it takes a moment to realise it is cries, shouts. There are people between here and there broken and terrible. Somebody lies naked, stripped by the blast. It’s awful.
Cecil is saying something, “... best go.”
“Yes, quite,” this from Mme. Roux. There were patrols and of course sentries, I see some now running towards the ruin.
“What the bloody hell happened?” I sound cross, but I’m terrified.
“Diana went bang, darling,” says Mme. Roux.
“It wasn’t a bomb, you just said as much!”
“Not an atom bomb,” she cannot help but delight in her cleverness. It seems wicked to me. All those dead people might have been horrors, but still. I say as much but Mme. Roux waves off my complaining to say, “You couldn’t get a bomb in here, unless they were expecting one. You were meant to wave the old Geiger about that Bittersweet had prepared and clickity-click, as expected. It never occurred to think it might still have an awful lot of the flowering stuff inside?”
“Is this really the time for exposition?” Cecil though facing us still is walking backwards and away. He at least looks shocked by what has been done; what he must have known was going to happen. “This ain’t the time for boasting.”
“If there’s no time for boasting then there’s no time for anything, darling,” insists Mme. Roux, but she walks after him anyway.
“But why?” I say.
“Trouble with riding the tiger, son,” says Cecil, “Is it’s bloody hard to get off.”
This isn’t an end to it I promise myself.
Posted by Alan at Thursday, May 24, 2012
Email ThisBlogThis!Share to TwitterShare to FacebookShare to Pinterest