A Game, Not A Sport 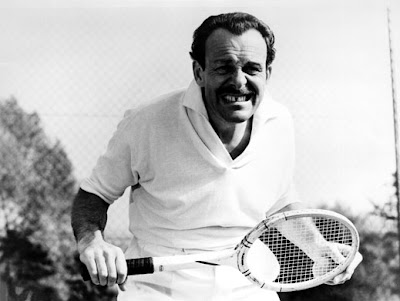 
I’m batting fifth behind Terry Thomas shortly, writing this in the shed that passes for the club house of the Tolly Maw Cricket Club. There’s not much of a pitch (it also serving as the car park for Biebers, our local supermarket) and the wickets are chalked on Peggy Ashcroft – but it is cricket nonetheless, And cricket is a game, not a sport.
I love cricket. It’s about the only sport – game sorry – that I really get to sit down and watch. Even if only the highlights, and then only if on terrestrial. The Ashes will ever see me with the radio on and stopping whenever anything happens. A game where even at the largest venues it’s pretty much compulsory to spend the entire day stretched out with a pint. A game where a test match goes on for five days of easy-going to-and-fro. A game that of all others is so counter to any racism and jingo that it doesn’t really matter who wins. Although of course, and secretly, it does.
I played cricket in school. Not only because frankly the idea of bowling in the nets of a frozen December was so much more preferable to getting filthy playing football but because it was good fun. School sports, fun, astonishing. Not like cross-country for example which by dint of just switching off and running I got put in the house team, and quite against any preference of my part. A few years back some of us played hobby cricket, which is like normal cricket, but by fat blokes in a garden and with the kitchen window as the boundary. Mind you given that only Moz and I could bowl, and that Jerry had only a perfect forward defensive stroke it’s still rewarding to think that Simon at wicket had to go to hospital midway through. True.
Cricket demands nothing of you. Once upon a time I would go to Brockwell Park in Brixton each day in a fine summer and whilst various raggle-taggle Swedes would do such things as scruffy people do in parks of a summer day I’d lie back and sneak the earphones on to follow the match. It can be involving without intruding on anything else you’re doing. It’s good to paint to, it’s not so good to dance to; but it’s too bloody hot to dance.
I’ve even managed to get my daughters interested so that astonishingly before bed and they’ll sit almost quiet when it’s on.
So I’m fifth to bat behind Terry-Thomas who’s apologising now in the best spirit of School For Scoundrels having accidently shot the second slip with a derringer.
It’s a game after all, not a sport.
Posted by Alan at Sunday, May 27, 2012
Email ThisBlogThis!Share to TwitterShare to FacebookShare to Pinterest