The Many Senate House 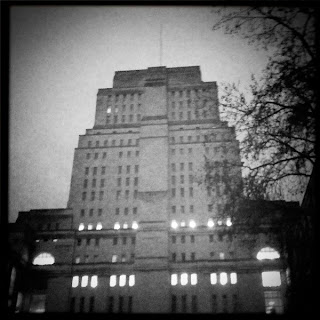 Bloomsbury and if not in the very centre of London then in its heart (located after all just off centre to Charing Cross) holds many fine buildings, and one of these the Senate House. The administrative centre for the University of London its shadow touches the British Museum. The epitome of the art deco building and completed in 1937 Senate House is either a work of clean art or a grotesque depending on your feelings. Mine lean towards both.
There is a suggestion that with the success of Sea Lion Hitler intended the Senate House to be the headquarters of the German governance of Britain. The same stories say it was therefore deliberately avoided in the Blitz, a nonsense at least in the second part for bombing was far from accurate - else if a building could be avoided any other could be selected. It actually housed the Ministry of Information and perhaps because of this became the inspiration for the Ministry of Truth in Orwell’s 1984. All this and when Bill Masen looked out over a darkened London still yet to know the full Day of the Triffids it was from the Senate House that the light blinked, a silent signal to the remaining sighted.
Senate House though it is known by different names in different places is one of the very few constants, one of the three of London. If there is a London, and buildings, streets and stone then there is a building, here, from 1937 onwards that even if it is not the ‘Senate House’ then it is certainly the same landmark if by another name, a different purpose. I’ve heard that one can pass through the slides here. That one can enter from one slide and then by going to a given floor, or door, office or room leave by another. I’ve not experienced this, I’ve never even been inside but both ugly and stylish, handsome and utilitarian Senate House is a building that clearly should be, and be in many ways, and so is in many places. All those places being the same place (albeit not exactly the same place).
Posted by Alan at Thursday, January 26, 2012
Email ThisBlogThis!Share to TwitterShare to FacebookShare to Pinterest