The Gout Strikes Back 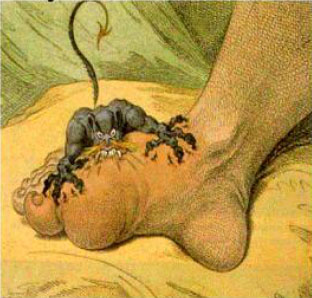 “Again, what is it with you? Man-flu too girly?”
I laugh, aha – see. “I don’t choose to have gout.”
“It’s all a bit dashing-explorer though isn’t it? Shouldn’t you be propped up in the club with a smoking jacket and red, angry cheeks? It’s not enough for you to be ill, you have to be painfully ill. Anyway, why are we talking about you – what was all that stuff at the end of the story? I never said anything about looking at Christmas trees with Alf.”
I’ll not mention the weather which has all the colour of a 1950s school uniform. Austerity weather. We never had it so good. Also wet. Also, and there we are talking about the weather. Mme Roux has forgotten that she’s here to complain about Nicely Pink In The Middle. I admit I added the end to make it more seasonal. She finds me at the parson’s nose of another bout of gout and very bloody painful it has been too. Taking the sprouts to school – a mile round trip, one hour to do so. I walk like a zombie but without all the company. “Also,” I say, “I left out the dinosaur.”
“I liked the bit about the dinosaur.”
“You made up the bit about the dinosaur. It was silly. There were nannies. Also, Derek Nimmo. I talked about him the other day.”
“I made it all up,” she says, “most of it anyway. I’m not really a character from a film.”
No, we could change channel. “Look, I’ll dig up some of the first stuff about you I recorded.” I promise.
“Am I fabulous in it?”
“It’s when you’re a bit older. You’re a bit of a villain in truth.”
So gout and all the pain that comes with it. Still, back again.
Sorry about that.
Posted by Alan at Tuesday, January 17, 2012
Email ThisBlogThis!Share to TwitterShare to FacebookShare to Pinterest