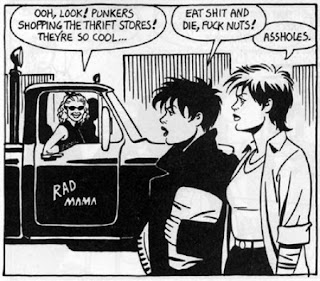 I know all about my feminine side, I've read Love & Rockets
As of a week ago when (here in the place of Santa) Windsor Davis and Don Estelle crept into our house to deliver presents, we are now a family in possession of an Xbox. Astonishing I know, we’ll have shoes next. And when I say family that is precisely what I mean. You might recall in The Simpsons when Homer so proud of his monstrous SUV is shocked to the bone when it is pointed out he has the girl’s model. As do I, although an Xbox.
Whilst in principle I support the idea that a console gaming system is something to be shared, it is worth pointing out that in this I am lying. Console games are for sitting about on a sofa whose cushion acquires the properties of memory-foam regarding crisp-inflated buttocks. It’s for times when the curtains just won’t open. When there is important archaeology to be done, on a rope, by tapping X. It is quite the very opposite of getting fit, yet there it is, marketed as a means to get fit. Like Mars bars are energy food, other than in the Arctic when lugging a tractor tire, by rope, to the pole. This Xbox has a... nodule, a cybermat thing that when it is turned on actually looks for you. It scans the room. It monitors you. It follows you. I’m not sure it approves.
And whilst I’m happy to have spent an hour or three tipping my hat to women with the word ‘ma’am’, sauntering about, and shooting people on the wild plains of the made-up west it’s not quite the same when my sprouts are delighted to see that the game is mostly about riding a horsey. They don’t say ‘horsey’, just as they don’t have pigtails nor a lisp, but they might as well have. And so now we have an Xbox whereby girls of nearly 5 and 8 can design avatars, dress them up, and giggle. We have an Xbox on which they can play. Because it’s for the family you remember. And the family gets to play nice games like Kung Fu Panda. And by the family in this context everyone else falls over, drowns and gets their head kicked in by cartoon crocodiles so that the family shout for daddy. And daddy has to take over instead of doing anything else. To jump and kick and fight cartoon-bloody-crocodiles. And daddy doesn’t want to fight cartoon-bloody-crocodiles as a fat panda voiced by bloody Jack Black. But it’s a family thing. Unlike reading through the small stack of Christmas books he has wherein grumpy Saxons raised as Danes almost certainly upset Christians, with a sword.
That might be what the current book is about, I wouldn’t know. Because I’m not being a grumpy Saxon raised as a Dane.
I’m being a King-Fu Panda. Voiced by Jack Black.
Though the kill count is probably about even.
Posted by Alan at Monday, January 02, 2012
Email ThisBlogThis!Share to TwitterShare to FacebookShare to Pinterest