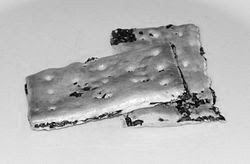 It’s easy to believe I’m caught in limbo, or the Mittlemarch, or some place in between. Tolly Maw is remote. I think that perhaps half the reason I walk to and from town is to make sure it is still there, though the six miles have certainly worked wonders with the weight.
‘You might have something there,’ says Mme Roux. She’s helped herself to coffee in my absence. She’s welcome to it; I make a rotten cup of coffee. I try and judge where she’s been or where she’s going but it could be anywhere in the first half of the twentieth century. She adds, ‘So what do you remember?’
‘Very little,’ which is true, though I’ve pinned down that I’m new here by just a few months I cannot recall anything about that from which I came. Somewhere thinner certainly, as my morphic field asserts itself. I did not suit nearly fourteen stone and eleven is looking at me with bashful eyes, someone I used to know and was close to. I believe I’ve done the right thing having gone passed the pinch point. It’s pretty clear whom I had to save, or do well by. Also with me wanting to move there’s an agreement there for the relative future – things align. For now we decorate and buy furniture as can be agreed between a nine year old and myself. I never knew Lime Sorbet was a colour – my living room walls stand as testament to that ignorance. There will be a Salisbury again (which is necessary as the odds are that that was from where I returned back to this year). Mme Roux might ignore paradox but I’m as neatly made in my manner as I am unruly in appearance; she, quite the opposite. I say, ‘What I need is adult conversation. I say I’m in limbo not just because of the situation, figuratively, but because I am so far removed from everyone. I’ve started to change that, redressing what my former-me sank into. Volunteer work again, book group and similar.’
‘It’s the only way.’
‘And you, where are off to?’
The Spanish Civil War, again. I leave it at that since there’s a fair chance we’ll quarrel as to sides. If I’d been born fifty years earlier I’d never have seen a year beyond twenty. Knowing myself then I’d have been on the first boat with the Internationals, and possibly unique amongst many men I am aware enough to know that I would have made a terrible soldier. There will always be enough young men never to have experienced... and so the phrase goes on.
Mme Roux more sensitive than I am used to changes the subject. She says, ‘You’ve noticed sympathies haven’t you? You must have done to remember how you’ve slipped back. That’s quite rare I can tell you. You usually don’t. That’s why it was a pinch point.’
I agree that I have. Oh, I know we see what we look for in such cases. But we also ignore them if we over rationalise. Connections - sympathies rather it seems is the correct phrase. I move in stages, ages, phases, what have you. Certain events replay so I know what to expect and know certain things to avoid.
‘Phone someone?’
‘Me? Do you know the last time I phoned anyone just for a chat?’
‘2003,’ she shows me the date in her little leather book.
‘That sounds about right. I don’t know. It just seems so intrusive.’
‘You never used to,’ she waves away my protest, ‘because seeing that person later you’d want to swap news then. For the now you find yourself stranded in 2013, literally miles from anywhere and anyone. This is apposite. You are changing the house to clean it of the old, to remake it as somewhere different. As you change and spruce up each room you are purging yourself of what took place there. A clean canvass. You always do something by doing something. You fidgit, you write, you draw, you make, you create. You don’t muse or mutter inside your head.’
‘I do a bit,’ I protest.
‘And yet here we are. With you working something out over the second cup of tea of the day, the children just dropped off at school and you a few hours into work already. People want to read about silly things, made up things; a bit more of a given story, or interesting crap about hidden things.’
‘Well this is all made up isn’t it?’ I wave at her.
‘Keep saying that and some of them will even believe it. You’re looking younger, it suits you. Keep that in mind.’
The last four words have a stress put to them I do not miss. And she’s nicked all my garibaldi biscuits.
Posted by Alan at Monday, February 04, 2013
Email ThisBlogThis!Share to TwitterShare to FacebookShare to Pinterest