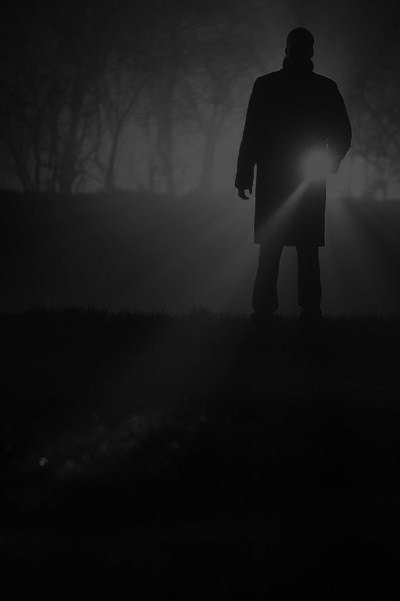 Lola likes the dark; or rather the torch lit dark. She likes it that the world is so small and moves about her in such a clearly defined boundary. She doesn’t feel the same way about the night which is unfortunate as the battery is going flat, and with it her mood. She’s a sensible girl and she’s better at this than I am. If she ever sees her tenth birthday she’ll be better still. There’s no certainty of that. I hope she will, and I’d pray if I thought it would do any good. But if we have a lot of hope then that currency has been debased in the last three years. There’s been a run on hope and a lot of hope might just about see the chickens lay come morning. A lot more might see there being a morning. I’d hoped there would be chocolate at the petrol station but hope hadn’t stretched that far.
“Creepers, daddy,” says Lola. She’s got good ears, better than that she can tell if something shouldn’t be where it ought to be (dark, torch lit or otherwise). Lola is autistic. That’s a super power. It’s certainly saved my life enough times. Every night we’re safe, or safer than now. The doors are never left open. We live because we have rituals, traditions, and all of them keep us alive. And we never, ever, forget them. Because if we forget even a single one Lola will scream and kick, she will round on me and curse me until things are as they should be. Back before everything went wrong I had a smoke alarm that went off if you so much as opened the oven, on or off. I had to either pull the wire from the thing or never use the oven. There’s a wire in Lola that you can’t pull out, but if goes off when the oven door is left open then still I’ll never miss a fire in the house. That was a different house. That house was in the city. No one lives in the cities now.
The lanes are overgrown. The hedges are remembering that they’re trees now there’s no one to tell them otherwise. There’s a lot of low cloud and it’s dark when I turn off the last of the torch. Lola is behind me. She holds on to my coattails. If I say run she will run. From my pocket I take out a pistol and straighten my arm. Lola turns me gently and moves me forward. I don’t see anything for a good ten yards before the shadow of an overhanging bough moves with us. Creepers are ambushers. If we walked calmly out of reach it would follow us and others by scent or some sound even Lola can’t hear would join it, if there are others. If we climb a tree the same thing so we walk slowly and stay out of reach until level with it I keep the awful pistol toward its head. Lola buries hers in my coat. I should have pulled back the hammer before now and doing so the creeper starts. It drops and the crack of the pistol echoes flat over the heath. I’m a crap shot and fire again just in case. I’m shaking. Lola takes my hand and before the sound has rolled away she’s forgotten there was a creeper at all. A meal eaten, a bedtime gone by morning, a sneeze, it’s less than a stubbed toe.
Lola is better at this than me. I wish she never had to be. But wishes are just hope in a prettier dress. Lola’s dress is colourful under her coat but there’s mud about the hem.


At first I wouldn’t hear a word of it. Lola never avoided eye contact with me. We always went everywhere together. We told stories and made up games. Social inadequacy? Not my Lola. At best I was blinkered. Her first word was ‘da’. She would always wear that fat, dribbling grin. I didn’t know that she grinned through the dribble because I had come into the room. So bedtimes grew harder. I had to sit in a certain place and hold her hand for a certain amount of time and the more she spoke the more complex things became. And by the time she was four even leaving the house was a six step process that would not, could not, be differed else it was back to the beginning. I admit I became frustrated, angry even. I never struck Lola but I did once take it out on a chair. Poor broken chair. I sound awful, and I was, just not very awful since if I rub at these few occasions it’s because scratching the scar of them never lets them heal.
She had friends, briefly. There hadn’t been much school before the world went wrong and I was shocked when going by one lunchtime to see her standing still, talking to no one, and vocally. The other children avoided her. The psychologists were useless and frustrated with it all I ended the last meeting asking if, after this the third, we could talk about Lola at last since everything had been about how it affected her mother so far. The doctors were better. Months of meetings and she was diagnosed, autistic, and for me everything was better. The beast had a name, only it wasn’t a beast. It was what made Lola, Lola. When her mother walked out Lola was staying with me, Lola’s choice; no hesitation.
But as Lola went right, the world went wrong.
Lola noticed.
I listened to Lola. I listened when she got caught up in a circle of her own logic that was flawed from one end to the next. I looked back without blinking when her gaze was a cracked plate so that the lines mended. We hugged, we always hugged. And it would all go away. Only it didn’t always go away. Calm, aware of everything, Lola would point things out and increasingly without frustration, without the insistence in what was right, or wrong. She noticed, and she told me, and long able to tell the difference between when she was right and when she was in one of her moments. I started to be able to tell back that then when she told me things that could not be she was not in that moment. And she was right.
There had been someone living next door, when now there was not. There had been roses in the garden. People had phoned, not just machines time and again (and always with the same message). When she told me a programme had been on the day before, and the day before that I watched, and she was right. The busses grew infrequent but specific in that infrequency. The nation’s most celebrated charity fund raiser was revealed to have been the country’s evilest man. The Pope resigned. There was a meteorite that struck Russia, three impossible things before breakfast with three more to go.


We live distant from everyone else, now.  There is a community twelve miles from us. Twelve miles used to be nothing. Twelve miles on foot in one direction, on bad roads, is a lot further. They know about us, we know about them, and at times we have to go there for things we need since they’ve long since cleared out all the towns from the sea to the mountains. They’re good people. There were bad people, cruel people, but they didn’t last. Even the smallest injury can go bad like the aftershock of the whole world. It might be different elsewhere but over in Keswick people work together because before things went bad no one hereabouts had grown up in a feudal society, they had lived by the big laws. In the new classless world they remained resolutely middle. If they’d had farmer’s markets and lovely celebrity chefs many there might well have preferred their world to that before. But the world had gone wrong, and wrong was bad, so they didn’t.
Because...
Posted by Alan at Friday, February 22, 2013
Email ThisBlogThis!Share to TwitterShare to FacebookShare to Pinterest