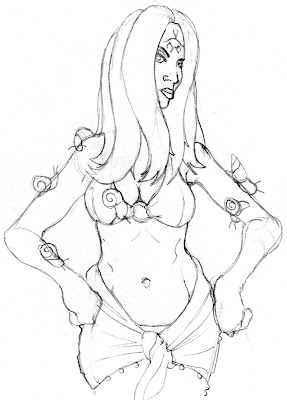 G. D. Holbourne’s many stories (most of them short) all tended to revolve about the same milieu and with little care for how they weighed up upon one another. In Kiss Me Quick little happens in the traditional vein. There is only a little conflict and that easily resolved, and the tale takes place entirely upon an unnamed British pleasure beach where a cult to the similarly never-named evil that was victorious some decades before suns itself and lives the life of a jaded Riviera in the height of what was then (the late 60s) provocative and fashionable beach wear. Living on chips and ice cream, whelks and brown ale the cult is never anything other than sunny, delighted and rather looking forward to the end of the world. Indeed, what conflict there is concerns quite why it is taking so long!
There is no Pepper Mint to be broken , dashing and dastardly. Martin Fucking Luther does not arrive to turn their occultist tables upon them. Barney Dunn never once wanders about as the everyman stumbling detective, and Miss π does not scowl at them and ultimately defeat them with the aid of her beatle-cut henchmen. Indeed, no one comes to sort them out and their traditionally cultist ways have become drab. In one memorable scene there is an argument as to whose turn it is to make the weekly sacrifice, since it is such a... chore.
It is the utter ordinariness of the cult that makes Kiss Me Quick so well rendered. Wake up, brush teeth, cut cheek, take a gin-sling on the veranda, kiss an octopus. The cultists very oddities are never presented as anything other than just another descriptive point. Like a hat, or the colour of the hair - and as ever with Holbourne always played very straight.


One for example (and here today’s ten minute sketch), ‘June May was dressed for Port St. Vincent with her hair eight thick ropes, Quant bikini, and snails.’
Posted by Alan at Monday, August 13, 2012
Email ThisBlogThis!Share to TwitterShare to FacebookShare to Pinterest