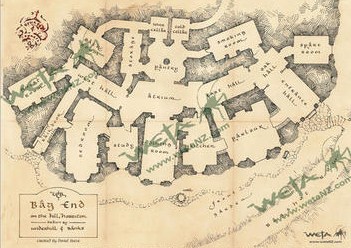 
So I got to see The Hobbit. It’s the most grown-up film I’ve been able to see at the flicks for an age, and for this I owe my eldest who at eight years old has firmly become ensnared by Tolkien. At Christmas she got various costumes, a bow and a quiver based upon the cartoon movie Brave. I’ve not seen Brave, but I presume there are cloaks and a bow else the tie-ins are a bit odd. But my eldest therefore was Brave right up until I insisted that we at least watch the beginning of Fellowship on Christmas Day. And soon right there my friends, she was hooked.
So okay, I had to give a whispered commentary as to what the hell was going on. She saw the first half or so of the first two movies (bedtime beckoned), and then when we discussed what film to see at the flicks she was very firmly in the Hobbit camp. So we went, just her and I, whilst her wicked mother and our youngest sprout went to see something cartoony (and probably with singing animals). Then last night eldest and I got to watch about half of the Return of the King. So it’s all been a bit incomplete for her. But she knows she’s an elf – they share eyes, and there’s been no talk of Brave, and a lot more about Rivendell.
“The film?” Alf wants to know. He’s been around to see what here I won’t need any longer. He has tea chests. Do they still ship tea like that?
It was jolly good. I’m glad they kept the songs, I’m glad they used the back story from elsewhere and my earlier mutterings about padding were put in perspective when I considered how much is normally lost when a book is crammed into ninety minutes. I like it that Thorin gets his head kicked in rather than being another Aragorn. I like it that the dwarves had plenty of personality. It was jolly good to see Rhadagast (and that the ring wraith barely appears before it is twatted by the addled chap). I trust Mirkwood will be in the second film. I have no problem with spending ages in Bag End; since the film is about leaving home, and finding one, it’s all rather important to show what that means.
Yet I had to see it in 3d. My eldest chose to, and who am I to say no?
But that was the right choice and for one reason. My little girl had worn her cloak (formerly Brave, now Elven) and despite what she thinks she looks a lot more like a hobbit in it than an elf. So when she dashed to the toilet mid film and ran by rows of people all watching in 3d then like some slapstick comedy they all started, some took off their specs, and all wondered at how great 3d was when the hobbit ran by them. Some might even have wondered at why a hobbit darted by during the fight with the goblins.
But it was certainly realistic.
Posted by Alan at Sunday, December 30, 2012
Email ThisBlogThis!Share to TwitterShare to FacebookShare to Pinterest