Mayans, Witches, and the Sunday Papers 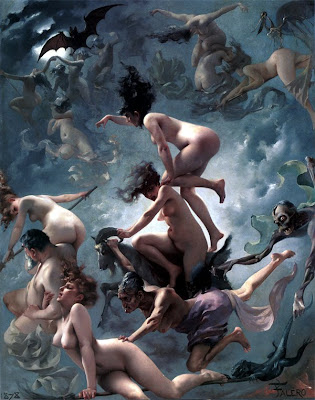 
The world ended today, probably, or at least that’s the internet gossip as a thousand kittens can’t spell the jokes that have flowed. Across the country, probably even a chunk of the world (though obviously not those bits where the world might very well end any moment) a lot of people are feeling rightfully smug because an ancient civilisation might, or might not, have got a prediction wrong. Those ancient people, eh? What a bunch of dicks. I have to assume that’s the case because I’ve not actually looked into the source of it all. I don’t have to; the internet is being superior for me.
It’s worth pointing out that I rather appreciate modern life. The strident advances in medicine get my support every time. The ‘net is a wonder that would have been pure fantasy only a few years ago – or at least to me, because I wasn’t born tech savvy and so admit that I never actually knew it was coming years before it did. The spread of information, the potential for imagination and creativity that needs an outlet has one, and it certainly beats the old days when in order for people to be hateful and awful about absolutely anything then even a megaphone in the back garden at 3am didn’t quite cut it.
I lived for several years near Stonehenge. On the bus people would be disappointed when they came close to it. It did not impress them, being stones, in a field, and without any form of interaction other than being able to look at them. They impressed me. Not because they are a mystical relic of some matriarchal warrior society but like a festival and with adequate birth control (that never existed, sorry witch-fetishists). Nor because they were raised by aliens, because... fuck aliens. No, because, well, you do it. When the best tools you have for shaping rocks are other rocks and the best way of moving rocks is with logs it all took some doing. They did not have the wheel. You would not have had the wheel either. We might have been the ones to push the bloody thing. Mostly we would have died horribly or lived with constant toothache. The past would have been a bit shit.
But we can respect it. How were the pyramids raised? By very clever engineers and skilled artisans. I couldn’t do it. And hey, I can light a fire, I can even hunt – albeit rabbits. I’ve got a country-boy’s eyesight in the dark and since I don’t stalk anybody that’s only of any real use when I have to walk home from nearby-town in the dark where there are no streetlights. Which is always. And I own a torch. A manly Lenser. So hurray for the modern world, truly!
So the world did not end. And since I haven’t actually looked it all up I don’t know if it was ever supposed to. But don’t let that get in the way of an easy dig at silly people that were good with stone. At least they had coffee and chocolate, so presumably somewhere nice to sit wondering when someone was going to get around to inventing the newspapers.
Aliens, probably.
Posted by Alan at Friday, December 21, 2012
Email ThisBlogThis!Share to TwitterShare to FacebookShare to Pinterest