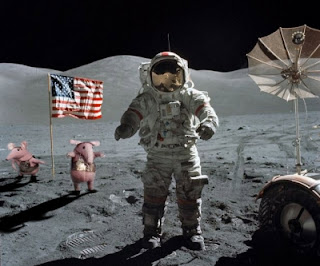 The film Apollo 18 is being released today in its original format. Edited at the last minute it was formerly a harder sci-fi story but early screenings showed that the moon people, all the more horrifying for resembling pink stuffed toys, would be unlikely to appeal to the kids market. The original story (based upon the documentary work of Peter Firmin and Oliver Postgate) boasted beasts made more hideous by their seemingly cuddly appearance. Triggering the entirely reasonable ‘Aghghgh clowns!’ fear response the story followed the landing on the moon with the discovery of dustbin lids used as hatches.
Invited within by the seemingly innocent moon people the astronauts uncover a horrifying secret, the moon monsters serving a mysterious ‘Dragon’, the film ending with one astronaut screaming the oft-quoted last line itself from the Firmin/Postgate series – ‘The soup is... people!’.
Nice to see they kept in the Iron Chicken mind.
Posted by Alan at Thursday, February 02, 2012
Email ThisBlogThis!Share to TwitterShare to FacebookShare to Pinterest