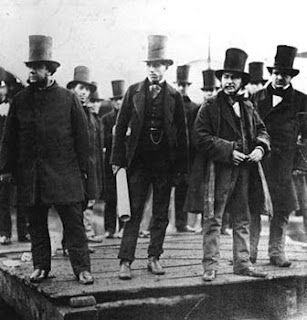 They're queer folk in the Shire. Not pictured, Dickens.
Today we celebrate the 200th anniversary of the birth of Charles Dickens. Sadly such a mouthful is compulsory as there is no English version of the phrase ‘birthday’. Dickens a social commentator, author and shadowy avenger of the night was not in his time best known for bleak expectations and great houses so much as his efforts to right-wrongs in the name of social-justice. In these more sugary times we tend to forget that Dickens not only wrote ‘for shame’ a lot, but rather more militantly used to jump out upon unsuspecting mill-owners and startle them for their workhouse ways. It is indeed from this that we still enjoyed until 1956 the sound of Policemen saying ‘What the Dickens?’ when faced with A Clue.
Dickens is similarly less well known for his early genre pieces, specifically crime fiction, early whodunits in which in the first person we are invited to detect away, probably saying ‘What the Dickens’ at each startling revelation and try and beat the narrator in learning who was the villain all along. I remember as a young boy, when tired of Sherlock Holmes, being directed by my mother to the enthralling tale of Horrible Horror At Madness Mansion. There I pondered like the very boy-detective myself down to the last two suspects, Mr Flumsy, and Beadle Badsoreness. Of course you all know the twist, of which the works were famous, and which brought about Dickens only angry mob when in Oliver there was none.
So raise a cup of humble to Mr Dickens. Happy birthday sir, you with your giant hat.
Posted by Alan at Tuesday, February 07, 2012
Email ThisBlogThis!Share to TwitterShare to FacebookShare to Pinterest