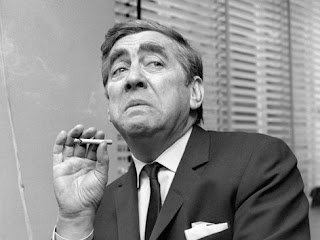 Hancock stealing le Mesurier's slot. No change there, the cad.
“I rather felt I’d given the game away with Bod.”

Where elsewhere and the country is neck-deep in snow here in Tolly Maw it is, and I quote god here, all rather lovely. God (as you might remember incarnate as John le Mesurier) sits on the only sofa not being used as a big-shelf for many-dollies. This leaves me only with the hard wooden chair on which to sit but that’s less of a problem than one might think as I’ve scarce had the chance to sit down. For John le Mesurier is a thirsty god and I’ve rarely looked about to be seated without the deity rattling cup on saucer in such a charming way I have to be about kettle and teabag once more.
The birds are chirruping, the Will Selfs are gambolling on their lawn and all unaware of the Tracey Emin (now fitted with a bell about her neck – albeit a doorbell) that stalks them. We watch nature’s delightful cycle, that natural circle of everything but we being terrified, nervous and dead long before their time. Or right on time, as John le Mesurier decides. Or perhaps he delegates?
“I delegate,” he agrees. “Or rather being frightful, I leave it to others.”
He’s up here because he does so hate being angry. Back down south and Arch-Bishops are burbling about gay-marriage, and the middle classes are burbling about Bishops. And it’s none of it all a part of John le Mesurier’s grand-design. Or his Grand Designs, but no one listens and mention of his rather charmingly vague plans puts him in need of a cake, so I have to hunt up tin, slice and plate.
“They all point at me, the darlings,” says John le Mesurier. “You think they’d be more grateful? Or only a little?”
“Your Grand Designs?” I say. I have to do it from the work surface because his appearance rather startled. By rather meaning very-much, and by startled screeching like a stuck cat and vertically jumping my own height in surprise.
“I put it on the frightful box for them,” he says. He adds as I clamber down, “Kevin McCloud, earnest fellow. Programme to do with chaps building hobbit-holes, or all of glass, or the one made of straw?”
“I saw that one,” I say.
“Everyone saw that one, dear heart,” says John le Mesurier. Grand Designs is god’s grand design to make everything on television occupy the teatime slot on a Sunday. Albeit all the time. He’s tried to show the difference. A tired old jab at reality television, but one apt. After all it takes quite some talent, quite some effort. Throw ten balls in a crowded-anywhere and you will probably hit ten people that don’t argue all that much, get to know one another and given that all they have to do is one task a week – do it. So ten balls sucked into vacuity, then well...
He sighs.
I say, “Is that wise, sir?”
He at least pretends to appreciate the quote. But snow, and not here, because we’re godly folk in Tolly Maw, though our vicar is Ming The Merciless and god is John le Mesurier, and worship is best through a black and white film. On a Sunday, afternoon, before tea. And is there a black and white film on? Something Ealing, something holy? No, because if John le Mesurier is not an angry god then he is a sad god. And the best he can do is Carry On Screaming.
So it’s snowing everywhere else and it’ll be slushy, and icy, and filthy in the cities. Unless you sit down with tea, cake, and Carry On Screaming.
“And Bod?” I say, knowing he narrated.
“An anagram,” says John le Mesurier. A clue, and just like Dan Brown – no, it’s not.
Posted by Alan at Sunday, February 05, 2012
Email ThisBlogThis!Share to TwitterShare to FacebookShare to Pinterest