No Longer Big, No Longer Clever 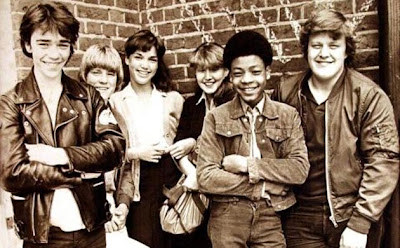 Everyone was on glue in the 70s

It seems very unfair that given I never read the Beano as a boy life now begins to emulate it. It’s the swearing mostly, I clearly can’t in front of the kids and that took some getting used to given that once upon a yesterday my every third word was the ever poetic ‘fuck’. When in the kitchen hammering a slap up feed* into place, or the garden more recently when Tracey Emin got stuck up a tree and the sprouts set about one another, shouting and a hollering, I wonder when the dread fear of Daddy yelling out ‘What the blinking flip is going on in there’ is going to grow thin?
My beloved Q tries hard but hasn’t mastered the art yet, albeit when driving. She’s a better driver than anyone else on the road, or must be because everyone else seems to be by oath and curse considerably worse. Swearing is big and clever, everyone knows that, and I feel a right plum** when my computer acts according to my nature and I in a rage scream at it ‘right you blinking flipping thing, I’ll blinking flip you, you flipping see if I don’t’. I sound like an argument in the playground of Grange Hill.
No, I was never one for the Beano. I was a boy for comics called things like War! and Sharks! which probably explains why I’ve caught myself saying both ‘strewth’ and ‘crickey’.
Logically I’ll be saying ‘borag thungg’ in a year or two, and referring to everyone as an ‘earthlet’.
And how zarjaz will that be?

*There it is! Beano, from when in post-war Britain a decent meal was a reward for... I don’t know, I never read the flipping thing. Foiling things I think. Back in those halcyon days of the middle-century when all it took to thwart the plans of a foreign power were boyish pluck and a robot chum? Something like that?
**Plum? For flips’ sake!
Posted by Alan at Monday, February 27, 2012
Email ThisBlogThis!Share to TwitterShare to FacebookShare to Pinterest