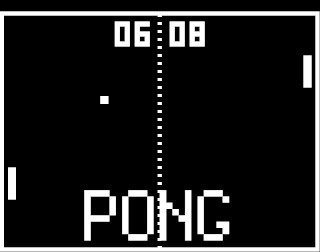 The last Transformers movie having recently been panned by the internet for having too much talking, meetings have begun regarding the proposed new Pong movie. Released originally on the Atari so far back in the soup of time that computers were still regarded by the sort of people everywhere who now complain about the richly-paced plots of the Transformers franchise as being bent, Pong would have broken all sorts of new ground for home entertainment had it actually been anything of the kind. Born into a time when computer programmers needed someone to hand them tools Pong allowed two, then later four, adversaries to play a game that had they been like other kids in the 70s they would have known was already being done better (and by a ball).
Problems had arisen however where now the original and ripely rich back story to Pong has come to the fore. Screenwriters led to believe the simplicity of the game represented only a game of ping pong, of tennis, or at a stretch something that could have football on the cover have stumbled on what you all of course already know. That starting as a young boy Pong encounters an escaped convict called Magwitch lurking about his mother’s (Pong’s) grave. Pong is scared into thieving food for the villain from his cruel older sister and her similarly horrid husband. Later he encounters an aging Lady Bracknell and her petulant adopted-daughter Estella, a whole raft of new characters all of whom are cruel Pong. He apprentices to a blacksmith and by circumstance is raised to society where he at first behaves badly, finding himself surrounded by yet more cruel people but by now a strapping young blacksmith.
Pong is saved from ignominy by a lawyer, Jaggers  (who is probably Arioch according to a throwaway line in Elric At The End Of Time) who reveals that Pong rather than being a wretch is actually a rich young man, whereupon cruel society instantly forgives him until Pong loses all his wealth. There is all manner of confusion as to who is Pong’s benefactor.
It is Magwitch.
The pair flee on a train together but are forced to jump and then progress over the Scottish hills and dells until finally back in London they discover that the 39 Steps are those leading to the sea in a cove, in Kent. There they are able to hand over the plans for the by now fully functioning Death Star.
Or there’s loads of explosions and, like, stuff.
Posted by Alan at Sunday, November 13, 2011
Email ThisBlogThis!Share to TwitterShare to FacebookShare to Pinterest