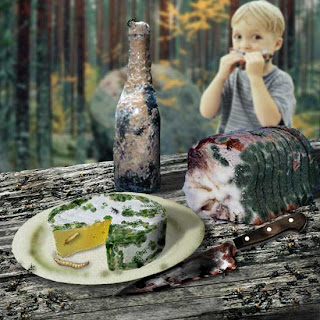 To a house made of angles and too many doors
The angel took Grouter for tea
They tried half those doors but none had a bell
So they knocked to attract the Trainee.
A young man more important within his own mind
Than bootlaces, treacle or cheese
Our Trainee with his status displayed with a badge
Only reluctantly went for the keys
To rattle and fuss and primp and to huff
To open one door with a scowl
To ask of their business in an educated voice
Little removed from an educated growl
‘Your master, the Boffin,’ the angel explained
‘Said if ever my belly should ache
‘It should come for tea (and in my company)
‘For toast, and for eggs, and for cake’
Disliking whatsoever sounded like fun
Preferring cog, screw, slide rule and a ratchet
The Trainee saw nothing funny, in anything funny, at all
Not contained in his mint collection of Pratchett
He whispered as he stalked of terrible things
Of hammers and shears for the silly
Longing to cut from Grouter his grin
Fingertips, eyelids and willy
Laughter was not, to the Trainee’s fine mind
For amateurs, for fools (and beside)
It was a mantra to be repeated precise word-for-word
A Hitchhiker, his towel, and his Guide
The Boffin, his master, his idol (his love)
Was tainted by malt and good vice
Of Carry-On films, to cure which the Trainee
In secret was making a device
A device, a machine, all packed in a tin
Whose biscuits grew softer than most
Till now they’d be taken at best for poor cake
And which the Trainee spread on toast
To go with the tea saved in drips from each cup
With a teabag that served as a sponge
With milk from a cat, and sugar from mice
And a cream (whose source we expunge)
On a tray made from bills and final demands
With glue from a stamp from a barge
For the debt on the bills was in fact rather small
And the size of the stamp rather large
Reluctant yet spineless, hateful and hollow
The Trainee took the tea as a chore
Like the visitors he left in the care of the Boffin
Where he listened by the key, by the door
Posted by Alan at Sunday, November 27, 2011
Email ThisBlogThis!Share to TwitterShare to FacebookShare to Pinterest