Fine dining at the sign of the Goat Willow 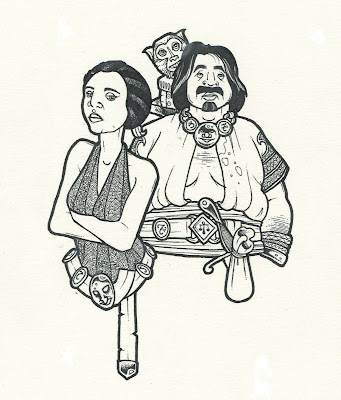 Your hosts: Luskus, Bouree, and Master Teeth﻿
Provender and Particulars
at the sign of the Goat Willow
We Applaud To Begin
A Confusion of Eels.
Blinded serpent fish frolic in a sauce of buttered dandy flowers. Attempt to catch and eat them whole in the Cretan manner with but a one tined fork – enjoyment for diner and eels alike.
A Worrisome Lark
A single spruced bird enchanted to sing to you even whilst within our patrons most delectable of stomachs. Prepared and served with a variety of dusting peppers for its tiny eyes.
Hot Buttered Knave
A locally reared youth brought to you haunch presented and spread to order.
Toasted Peregril
Nobly slain in mortal combat, the Slather Fiend of Hothensopet is here preserved in a jelly of brandied bees and a collation of goblets with which to raise a glass to its honour.
A Mystery Of Soup
An admittance by the patron for his scalding lack of imagination, nobility and delirious fear of more seemly fair.
We Defeat The Sea
Trampled Salt Bask
A rarity of Crete, the champion’s portion of the catch stamped by thin slaves in the traditional scaled clogs, and gathered as salubrious paste. A performance of toast accompanies.
Scolded Swordfish
We defeat this duellist of the ocean according to the Ligurean principles of Genoese swordplay. Berated for its nasal presumption it is presented in the company of a dozen naughty clams.
The Mermaid
By arrangement Fair Jacinta adopts the measure of a maiden of the sea. Might you good Sir, Master, Ritter, Lord or Prince pursue her to the dappled caves?
Of Meat
Rack of Spring Lamb
Select ones choice from the meadow of a morning. Tortured upon a stretching table we ensure that it will hold nothing back from our culinary inquisitors! Laid to rest with a crust of mint and small levers of seasonal vegetables crying in three wines.
A Surprise of Foul
Chicken lips crisped and performed atop a sweet basted flamingo haunch.
A Cunnilingus Apart
Tight selections of the day’s provender arrayed within and without Beauteous Donati. We arrange the Supple Donati in perfumed privacy within a harness of spiced, sour fruit sauces.
The Breathless Beef
Throttled steak encased within a frightened pie. Touched with a salamanders flame and performed at your table in the company of our famous pickle legion.
In Hindsight Compare
Creamed Brute
The hairiest of roustabouts topped with wet nursed cream, each whipped to your preference and allowed to settle in strawberry dribble.
The Heroes Repast
An assault of gingered blooms of such spice as only a hero might complete. Provided in two evenly balanced parts for our more competitive patrons.
Ice Blossoms
A cornucopia of ices best tastefully cleansed with our decoration of edible spoons.
Wines and Ales Presented in accordance with choice as most suitable to balance each course.
To finish, a selection of companion – pray see your host as to the daily speciality.
Posted by Alan at Wednesday, November 30, 2011
Email ThisBlogThis!Share to TwitterShare to FacebookShare to Pinterest