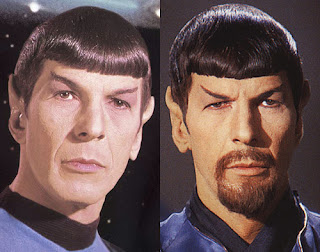 As some of you know (that whilst moving to Tolly Maw has been if not a rewarding experience then at least a diverting one) one thing only has been causing me a great deal of stress. Such a small word but one that scarce encapsulates the disturbed nights, the pacing, the pint after pint of moderately weak lemon & lime squash (which is getting harder to find) and the incessant, annoying, beard. I can hear it now. Growing. But it’s not the facial hair that is leaving me a bloated wreck, a blotting-pad of a beached sea lion left too high, too dry on a stony beach, a terminal beach - but our neighbours. Not Mervyn Peake’s head I hasten here to add who has been as supportive as a creative head can be, but those on the other side. For months now Will Self has been living some dispassionate odd-couple life with his elected life partner, Will Self.
It’s pretty clear that like so many others you hear of but never actually meet, they love each other too much to leave and leave each other too much hate to live. I’ve complained and even gone to the Parish Council but without a record there’s not much they can do, apparently.
So I’ve started to keep notes. And so far this month –
November 1st, 2011. Morning.
Will Self is loudly calling Will Self a ‘selfish, facile speck of fucking issuance’ over who’s turn it was to buy the cornflakes, of which they have none after using them to make macaroni pictures of Martin Amis, after they had no macaroni.
November 3rd, 2011. Morning.
Will Self wearing only the box from a George Forman grill is demanding that Will Self stops hiding all the booze. Will Self, loudly and for two hours, screams that Will Self must produce more booze or he’ll ‘fucking castrate Will Self with hair tongs’. Will Self replies that Will Self ‘wouldn’t fucking notice, eunuch being from the Greek ene, and ekhem, so a fucking bed keeper’ and ‘hair tongs, what fucking hair?’
November 4th, 2011. Afternoon.
Argument about hair. Will Self storms out to shed to return with garden sheers. Sounds of a struggle followed by screams reminiscent of a teenage girl after having had to shoot her first pony. Will Self loudly calls Will Self a ‘fucking Westworld cowboy’.
November 6th, 2011. 4am.
Woken by sounds of Will Self shouting encouragement to Will Self. Cannot determine about what. Corks fly and at 4.20am a scratchy LP of a bugle announcing the charge is played, many times.
November 6th, 2011. Afternoon.
Dressed in armour made from pillows, newspapers and in one case a birdcage Will Self and Will Self have a battle in the street. It takes half an hour before the first blow, which is greeted with snortles on the part of each and much sneeringly shouting of the word ‘schadenfreude’. They smoke fags if only to flick the butts at one another, each time whispering more quietly, yet more pointedly, ‘schadenfreude’.
November 8th, Late evening.
Windows broken, much shouting and demands for pistols made upon one another. Violence spills out into the garden where having at each other now with forks Will Self and Will Self spit tar at one another as to who used the last of the ‘Dark Angel Green’ on whose ‘Fucking Space Orks’.
November 11th, Night.
Will Self wakes half the town when he drags Will Self out of the house, the last screaming like bags of lit kittens, the first furious and calling to the gods for vengeance. Will Self helpless before the onslaught of Will Self is pinned to our garden gate with antique nails and a toffee hammer, but laughs and demands ‘who’s fucking Voldemort now?’. We cannot see what the cause of the claim nor the violence is, Will Self only shouting ‘Bruce Almighty?’ for an hour before setting about Will Self with a grass snake.
November 13th
Both Will Self and Will Self have taken to fighting crime in the personae of ‘Zeitgeist, The Man Of Now’. Zeitgeist came round our house at lunchtime demanding ‘two large gins, two pints of cider. Ice in the cider’ before the one pissing on the single worn shoe of the other declared his self ‘Zeus’ and the other therefore ‘Danae, you fucking princess of Argos’. Both then shouted that they had a heart condition, and it would therefore be murder to hit one another. Whereupon they snogged.
Posted by Alan at Tuesday, November 15, 2011
Email ThisBlogThis!Share to TwitterShare to FacebookShare to Pinterest