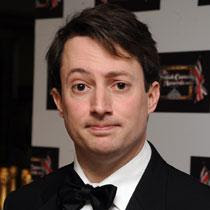 It has surprised many that in the recent, ‘no more, not again, you have to do it properly this time’ elections held in Iraq over the last fortnight that the new leader of New Iraq is David Mitchell. Hailed as the only sensible choice for a nation badly in need of a leader able to smugly mock the leaders of other, less Footlights-experienced nations Mitchell has already promised to bring about the sort of middle-class literate evil that only a man of his talent, dead eyes, and lack of ever having suffered a bit of a smack can reliably promise.
Mitchell, the son of classic Dr Who villain The Master (back before The Master inexplicably thought he was Bez from the Happy Mondays) has promised that in his storyline he will need at least six proper half-hour episodes in order to be defeated, and that no amount of ‘simply running around Hogwarts’ as evidenced in recent series of the long running BBC television show will see his end.
Which is about as close as we can expect it seems to a bit a joke. Because President Mitchell (or Caeser as he has chosen for his official title) is quoted this morning, when asked to make with the funnies, as saying, ‘Oh yes, because I’m a comedian that’s all I’m good for. I write for the Guardian too you know, and I’ve had a book, probably more than one, published too. Which has nothing to do with the comedy. Well I’m very sorry I’m sure, but some of us have got some dictating to do. And not like a secretary. I’m not actually Mark off Peep Show,’ then. ‘Hang on did I say that out loud? Did I think it? Oh god, what if they heard me?What if they’re hearing me now? And I bet they all did it last night too. Bloody foreign affairs journos with their limbs, and they’re funky blue helmets. I bet they’re all bloody shagging Victoria Coren, too.’
He then concluded by pointing out he could have people killed now, and probably jolly well would too.
Posted by Alan at Friday, November 11, 2011
Email ThisBlogThis!Share to TwitterShare to FacebookShare to Pinterest