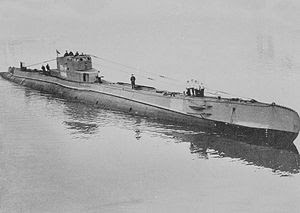 There was nothing, absolutely nothing half so much worth doing as messing about in submarines.
Mme Roux in sunhat and cotton lace toyed with a Russian revolver newly cleaned and set amongst the tea things. Parasols shadowed the deck and not so far to either side the sea, too hot to bother with them, went by on its own lazy tide. Several of their young captain’s sailors did whatever it was that sailors did, on hands and knees, to the other side of the conning tower. But this side it was flannels and boaters, and with a flat bang one of the boats Belgium self-loading rifles. They had been here long enough for tea to be served and it seemed to attract a little attention.
‘Did you hit him?’ said Mme Roux peering now through a pair of small binoculars. ‘I don’t think you did?’
‘Only the pedalo. Not sure it’ll sink much so hopefully he’ll have gotten the message,’ said Jonty. He let the borrowed rifle rest where his boots crossed the submarine’s rails now to take a plate from Mme Roux. The smells might have been of the coast, rot and creosote, but it was rather splendid he thought to enjoy a summer picnic without wasp or fly. He toasted his hostess with a macaroon (but she still with binoculars to eye missed the gesture).
‘I don’t suppose he can fail to. He’s a silly ass, isn’t he?’ Across the water and the pedalo started to turn about. Stumbling in the little boat the fat figure with the speaking trumpet (that had been demanding they leave or surrender) shouted without it at the pair that now pedalled the faster back towards a pier.
‘It’s his sort, pumped up prig with a little gold braid and a funny moustache; a bank manager in uniform. Gods knows why he bothered at all. King and country I suppose.’
‘Maybe Bolshevik refugees? Menshevik agents? Pankhursts or just plain old Communards  -  so many flavours and all of them cabbage. Socialist, fascists and Telegraphists. What they need is a decent civil war. Let’s oblige them.’
‘They’re a bit early don’t you think? Word of the King must have spread fast. Indeed, has it even happened yet? And here we are, and as ever you have chosen such a very interesting spot for your cloak and dagger adventures,’ he fetched out a cigarette case from his jacket where it hung on the back of his chair. ‘Will you be running up a flag? Or have we yet to decide which to choose?’
‘I only like the one but perhaps another will choose you?’
‘How very Fabian of it, so should we clink glasses then and laugh like chickens?’
Mme Roux smiled slightly. She replaced the binoculars. She took up the Nagant revolver to load it with polished cartridges taken from an empty butter dish. Jonty watched her with studied indifference. Indifference studied indeed many times in the mirror. He lit his cigarette. Two conservative looking maids cleared away the tea things. Jonty inspected his rifle. He looked about for an oily rag but saw not a one. The sea air would be doing the gun no good at all. The cigarette was only half smoked when he flicked it over the side. Sailors were now breaking down the table and he rose to let them at the chair, jacket in his now free hand.
‘Can I ask if there is any purpose to our being here? I understand about the King of course, but there can’t be many boats like the Jormungand. Friend speaking-trumpeteer might be anyone, and so know someone, and someone might be able to do something about us. By us, I of course mean you.’
‘Does it trouble you, Jonty?’
‘Trouble me?’
Mme Roux tugged at the ribbon of her sun hat as she picked her way up the side of the submarine’s conning tower, button-boots ringing her progress. A maid caught the hat and then the boots too as they too were dropped a moment later. Above and another, Jonty could just make out, held a blanket to conceal his host. Jonty having lit and smoked another half cigarette joined Mme Roux only after she had changed. Below and all evidence of tea had vanished. Even the maids had descended within and Mme Roux gestured that he should follow. She had dressed somewhat Prussian, but for yellow silk at the throat. He saluted her smartly.
Below and their Captain waited, the rapping of his fingers on brass the only sound below not mechanical. With that hand he gave up on his impatience to tug at a beard thick, full and forest black. He grunted a greeting to Jonty. The captain had the Jormungand because he in their company had stolen it. Big as he was, he stooped. It seemed to Jonty a post-command for jockeys.
The air was close, warm and as fresh as it would ever be. Damp too for the air in the boat was mostly steam. Jonty (whose experience with submarines involved theft and two voyages, this the second) did not like them. He did not understand them. And this boat where the scent of lavender fought that of wet dog was one of the very latest. A new Dutch O Boot that on seeing it as they had escaped from Prussia they had just simply had to have.
‘Captain Ewerlof? We may depart,’ said Mme Roux.
Posted by Alan at Sunday, November 18, 2012
Email ThisBlogThis!Share to TwitterShare to FacebookShare to Pinterest