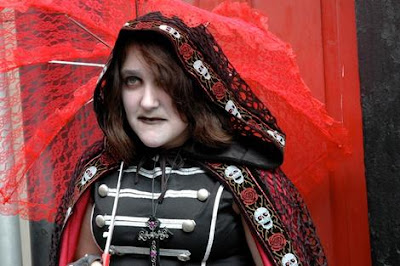 Hard-core Hobbit fans are said to be unhappy at the changes that the film has taken with the much loved story.
First published in 1937, The Hobbit tells the story of an ancient pie-eating warrior who having lost his one true love whilst killing hundreds of orcs turns his back on the Valar and is forever cursed to walk Middle-Earth as an immortal monster. Since the 1980s fans have  taken to dressing in black and swanning about three stone lighter as a sop to the inner turmoil of their beautiful souls, eating big pies, and wishing they had super powers so that in order to balance a bit of bullying in their youth they could kill their former tormentors completely dead until they’re sorry.
The current adaptation however shows a different take on the theme. Fans have objected to the idea that Hobbits, far from catching fire if getting out of bed before noon now ‘sparkle’. The doomed-loved motif is replaced by telling the story from the point of view of a terribly-thin girl that chews her lip a lot, and though who really wants to eat pie will die if she does so. Die, die, die!
The Hobbit theme of big pies and eternal youth was more recently explored in the best-seller Fifty Slices Of American Cheese which itself started life as Hobbit fanfic.
Robert Smith of the Cure had been unavailable for comment, seeing as how he ate all the pies.
Posted by Alan at Saturday, November 24, 2012
Email ThisBlogThis!Share to TwitterShare to FacebookShare to Pinterest