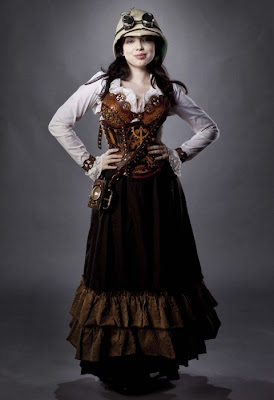 Got dressed in a hurry again.


As an answer to the piece a few weeks backs (Oct 25th,  Memory Knickers, Viking Wine and Tyranny!) renowned burlesque artiste Dita Von Teese has announced her own range of vintage lingerie to be produced through that renowned corsetiere Debenhams. The announcement comes that Miss Von Teese wishes to ‘make women feel glamorous and sexy’; which is very kind of her I’m sure.
At least there is a name that matches a product. We’re all used to celebrities putting their moniker to whatever can be boxed and sold, and here so close to Christmas. It probably makes more sense than the Kate Moss brand of articulated lorries, or Norman Tebbit’s range of feminine hygiene foam (‘Norman...’).
Already though there has been scepticism from the all-important steampunk LARPers, cosplayers and genuine Martian lady-explorers market. Currently the largest slice of the corset industry, for those that do not know of what I speak steampunk is a science-fiction genre based upon an alternative Victorian milieu. Whilst in both the feminine garb relies upon heavy skirts, blouse and restrictive whale-bone underwear it differs from the historical in that by some quirk the latter is worn outside the former. Gentlemen explorers to keep in character strut about with their underpants over tight leather trousers. Von Teese hopelessly misjudging the market has produced a range designed to be worn next to the skin.
Ever having been a slave to fashion I type this missive with a string vest worn over my coat and a pair of Superman boxer shorts over my jeans.
Posted by Alan at Wednesday, November 21, 2012
Email ThisBlogThis!Share to TwitterShare to FacebookShare to Pinterest