What the hell happened to wosisname? (end) 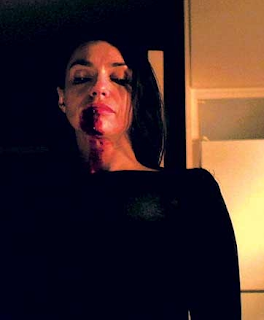 This is the final part, scroll down and read those previous in order for fullest effect.


There are six glasses on the table for Charlie has not returned them to the bar and no one is collecting. She is alone in this if not upon the table where new friends sit and change places as if a queue unseen is passing about the Punch so that over the course of the evening she meets everyone.
Now and chatting about her roses is Milly whose husband died in the Falklands, not in the conflict but from following a penguin into a minefield. The conversation is the same as that of the brothers Pike, Henry and Rufus who though they share the play of anecdote and answer are talking instead about their sister Pru who went to Carlisle to be a lesbian (which both seem to think involves a written exam). Mrs Francombe sits now a table over having taken her turn with Charlie and perhaps still thinking about the Polish POW she once hid in a chicken coop until 1953. Tom Ruddock who owns the largest farm in the district is in his regular place of authority by the bar where Billy George and he recall the time they went to Glastonbury Fayre in the late seventies (of which they are still arguing about Steve Hillage). There is Hector who ordered a mail order bride and is in litigation with the Post Office. Annie Twist who waved at Charlie from her bike is gossiping with Mary Monroe about the antics of their third, Alice, who died six years before and still pops by for tea.
And there are others, many such though the bar is small and most have to stand and they all know Charlie a little better now. Just as they knew her Mum who was one of them until stolen away by her Dad. Of course he came back though alone but for Charlie and she remembers them all or thinks she does. But in the way that whilst as a girl she thought Ever Decreasing Circles was comedy gold until on a rare rerun it was not quite right. Everyone had been younger, there had been a laughter track, and whilst things had been in their place it had seemed like a bad copy, a mockery of the original. Not funny, cruel. But everyone here was friendly and everyone here was pleased to see her and if no one cared what she had been up to in her adult life then that suited Charlie who shared the sentiment precisely.
Into the Punch came wossisname.
Standing by the door he elicited little attention at all though he was dirty still where dried mud remained and his hair was messy where sweat had been and gone. He had perhaps expected more, bin bag in hand and face set, downcast yet hostile. The Punch did not so much as move out of wossiname’s way as ignore him so he was forced to push to where Charlie sat and from within the bag pull out a Versace dress, a Prada handbag and a tangled clutter of Agent Provocateur. Her phone fell upon the first where it lay draped in the lap of Henry Pike. It rang. Charlie accepted it from Henry and turned it off.
“These are nice, dear,” said Milly holding up a satin corset tangled up with a single stocking.
Wossisname said, “Where is your husband?”
“Dead?”
“You killed him.”
Charlie shook her head, “I’m sure I would have remembered. London fell first to the catastrophe. That’s right isn’t it, Milly?”
The old woman looked up from admiring the fit of the lingerie across her tightly buttoned chest, “Sorry, dear?”
“London. That’s where the virus, or the deaths, or whatever it was breaks out.”
“If you like, dear.”
“There is no virus, there is no catastrophe,” said wossisname. “You just need help. You just need to get away from this place. They hold to some old religion up here. They’re going to use you in some ritual tonight. They’re preying on your paranoia.”
But Milly only laughed. The Pike’s laughed. Overhearing the argument Mrs Francombe laughed. It was infectious. Soon Tom, Billy, Hector, Annie and Mary were all laughing and not just them but everyone. The publican laughed loudest of all banging his hand on the bar and wossiname turned on them all perhaps aware in his heart that he was in danger but bolstered by anger and now offended at their treatment of him. He looked as if he might have shouted but Milly tapped his arm and he looked down to see her drying her eyes with a pair of thong briefs in silk, “Oh dear,” she said. “Oh, deary me! We’re not going to do any such thing tonight.”
“Of course you are.”
“No dear, that was last night. And here she is, just as we summoned her.”
“But the Evocation?”
“Invocation, dear. Invocation. Quite different,” Milly turned to Charlie. “So sorry about your mother but she was so frightfully keen. Such a good girl, and she was such a very good vessel.” Then back to the hiker, “Invocation, as I say. One envokes a spirit without, but that is so very messy. No, an Invocation - inviting the spirit within. Much neater. Hard on the vessel of course but what a sweet girl it made. And things are getting on and we’re none of us young now. So we summoned the spirit, and here she is. Aren’t you Charlie?”
And she was. All ready for whatever there was to be done. Nothing nice she thought, “What shall I do now?”
“Whatever you wish, dear. Yours is the power, whatever you say.”
Charlie was happy. She had it all planned out, her catastrophe with Stephen, and Hugh, and Bruce if he was to be found (or Ray if not). And she would be a huntress. How brilliant was that?
And what the hell happened to wossiname?
Really?
Posted by Alan at Sunday, October 16, 2011
Email ThisBlogThis!Share to TwitterShare to FacebookShare to Pinterest