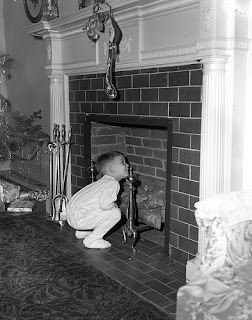 It’s Poet’s Day and whilst tomorrow to my dismay is not therefore Saturday, nonetheless we like to join in. Cope knows I’m no poet, but I do like nonsense rhyme. So swiftly so...
In the gaol where the guilty would wail as their tears,
Were mocked by the worst of poltroons,
That would pick at the scabs left by their fears,
Here where they hung one and all from balloons.
The gaol being a chimney that went mostly down,
The best of the guests would rise up.
Leaving the worst of the villains back down in the brown:
To catch at the tears with a cup.
Suspended, the best of them near the occasional light,
In the gaol this was the one sentence,
The worst of them hung in that brown beyond sight,
The balloons fuelled down here by repentance.
So a man that had wept and had suffered sufficient,
For the balloon of his guilt to rise high,
His villainy undone, his slyness deficient,
Would be freed to there openly cry.
This was true. It was written, and weekly declared,
By silhouette before that brief sun,
And though many there, their souls had repaired,
So far freed had been two less than none.
But such hope made for tears that never quite dried,
Such tears that would fall in a trickle,
Such tears that would succour of the worst of the tried,
And the worst of them all: Toby Prickle.
Posted by Alan at Thursday, October 06, 2011
Email ThisBlogThis!Share to TwitterShare to FacebookShare to Pinterest