The Fab Four (and the Catastrophe) 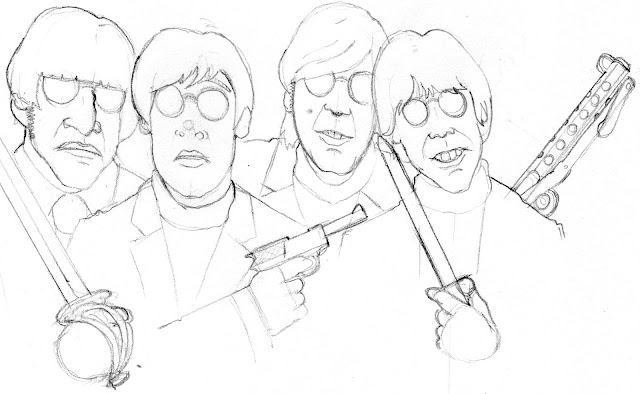 In the Miss. Π stories, or rather where she appears, the agent for The Garden never sullies her hands in the scrap and bustle (or at least not in those that I’ve read). In each she had near to hand a number of fashionably suited henchmen. Each is a rather clear pastiche of whatever pop band was riding high in the charts and the culture of the time. In Jennifer Lions (one of Holbourne’s few full-length novels) the ‘boys’ are clearly The Beatles.
Mop tops, smart clobber, and a mention of Liverpool - where they go the screaming youth are sure to be waiting for them. Albeit that in the post-catastrophe dying world of Holbourne here they are killers brought in to mop up whatever horror has been uncovered by Miss. Π. There’s nothing subtle about them. Chauffeured and grinning like feckless monkeys they dash from car to door whilst their fans faint from seeing them. In part of the shifting world of the end days described it is such devilishly fab killers that are the celebrities.
Really they aren’t central to anything. I don’t think they appear in their own story (though they might well, there’re a lot of them I’ve never even seen, let alone read – and doubtless some I’ve never even heard if) but rather form a cameo when Holbourne’s story is not about describing lengthy gun battles and two-fisted fury. It happens, it resolves, but off page as it were.
And when Miss. Π is the hand that has pulled back the veil, it is the popular hit men that cruise in to seal the fate of that week’s horror to the adoring wailing of hundreds.
Posted by Alan at Tuesday, September 11, 2012
Email ThisBlogThis!Share to TwitterShare to FacebookShare to Pinterest