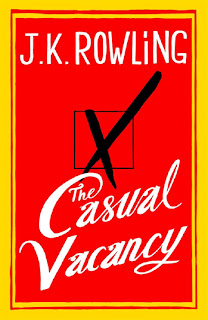 Reviewers have almost certainly slammed J. K. Rowling’s new novel The Casual Vacancy today. Rowling, the author of a series of children’s books aimed at children, having finished that series of children’s books aimed at children (and similarly having probably dared to write something else) is very likely coming under criticism by journalists who want to have done that too.
The Harry Potter series has long been criticised by adults for its flaws, most especially concerning the way it seemed be a series of children’s books written for children. Coming under flak for being about a child that discovers magic and does magical things in a children’s book written for children, adults have long been upset about Rowling’s inclusion of a wizard with a beard. The most common criticism however relies of the admittedly farcical assertion that in a public school with elves and magic there is absolutely no mention at all of progressive rock music. This damning indictment of the series (whilst being only slightly ahead of whining about there being a villain, that is dark, and uses dark magic, in a series about children doing magic in a children’s story written for children) has probably led to adults now complaining that Rowling’s book most likely contains nothing of the sort.
Maybe in newspapers today J. K. Rowling has been condemned for her latest novel, not a children’s book written for children, for thinking she is better than reviewers by writing something else.
Probably.
Posted by Alan at Wednesday, September 26, 2012
Email ThisBlogThis!Share to TwitterShare to FacebookShare to Pinterest