Exams, The Cure, and Joyce Grenfell 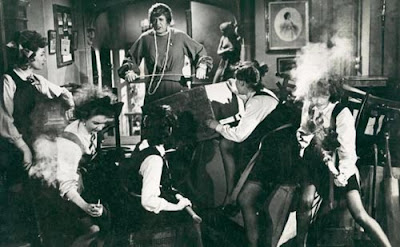 Teachers are said to be relieved that once again Whitehall has changed everything in order to make the exhausting and under-appreciated profession have something to do all day. ‘Being given everyone else’s puberty-ridden ratbags for the day was actually getting a bit easier since the last sweeping changes were almost understood,’ said secondary school teacher Joyce Grenfell today. Joyce having entered the profession in order to be closer to middle-class white boys that think themselves to be gangstas, cockneys, or the occasional member of The Cure goes on to say that ‘I’d almost managed to get an evening back and was worried I wouldn’t have anything to do,’ something that thankfully looks set to change.
Not long back at school with the new term, Miss Grenfell admitted that having some of the summer off was frankly too much of a chore, ‘Long days filled with not a single rude girl hurling abuse at me for daring to raise the subject of the apostrophe saw me seriously considering a job with a lower level of stress and responsibility, air traffic control or bomb disposal for example’.
The new system set to replace GCSEs, the EBacc, goes back to a more worldly age when far from having to work much during class young people are able to let it all slide until the last minute and then cram like a bastard, doing a half-arsed job for a single exam. Experts suggest that the new system, nothing at all like O Levels then, prepares students more fittingly for doing everything at the last minute, in a panic. It has been suggested indeed that A Levels will in future be dependent on blaming someone else and claiming credit from the smart kids who have the sheer temerity to think that they should get a pass based on some sort of merit.
Posted by Alan at Tuesday, September 18, 2012
Email ThisBlogThis!Share to TwitterShare to FacebookShare to Pinterest