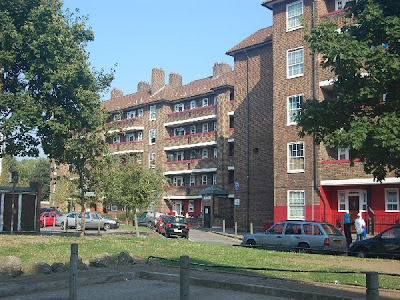 They had nursed the bus along the Old Kent Road but dead in the shadows of London trees it was, at best, a wreck. It was nonetheless a fine sort of bus. A bus of colour (many), and reliability (little). Inevitably it had become the Magic Bus. It had crossed the country many times, by many hands, but for three years under one and that hand the Captain’s. As a man he was much like his bus. Older than others but cheery enough, and so too like the bus he had spent so long travelling no one was entirely sure from where he might have started. Where he had stopped though was the estate, and far from home Vi stretched, and yawned, and frowned at the long blocks that lined either side of the road. They were only a short distance from main roads and roundabouts but a whole world from both.
“Where are we?” she said.
The Captain stood as others left the bus. He rolled up a cigarette one-handed. It had taken him weeks to make it look so simple. He said, “The Rockingham.”
“What the fuck do I do on the Rockingham? My brother’s still stuck back on that site. You think he’s still there?”
“He’ll have got a lift.”
Vi hoped so. Twins, she worried about him. Both slim as snakes he looked more girly than she, what with the hair and the pink leather. In contrast in her boots and tatty jumper it was difficult to say at times who was the manlier. Something the Captain had picked at all the day before so that her brother had stormed off. It had been he coming here, and so not doubting he would then here Vi would have to remain. “You think?”
“Aye, but they might have a surprise coming if they do. Nothing like a toerag’ll give you a ride to sulk when he finds a nice girl is a boy. Nah, he’ll be right.”
Vi handed over a little towards diesel. She said, “You know this place?”
“I used to live down Kennington way. Came by not long ago. It’s all right here. Bit fucking arty,” he made to juggle in the air. “Guitars, and readings, and all that shit. Fucking wasters the most of them. Horse is all right though. Bit more go to him.”
One of the others still sorting through his bag looked up. Of all those that had jumped the bus he was the happiest. He squatted round here and had only gone up to Wiltshire for the weekend.  It could not have worked out better, and feeling that luck should be spread about said, “He’s got a bone on for Livy.”
The Captain didn’t know the name. It was Vi though who said, “Who’s she?”
“There’s a load of them live up in this big old house on the edge of the estate. Big old commune thing, they’re all right I suppose. Livy’s sort of the leader they don’t have,” he stood up to shoulder his bag., “Pretty too, proper pretty. Not much for sharing it about either. Not snooty mind, just...” he made a face. “You won’t get in there in case that’s your thinking.”
“And this Horse is mad for her?”
The boy nodded, raised a hand and left them alongside the road.
Vi watched him go. Before he turned into the blocks she bent to go through her own pack. She had a dirty smile on her face. She said, “We’ll see about that. You want to introduce me to this Horse, Captain?”
The Captain could see no good reason why not.
Posted by Alan at Tuesday, August 14, 2012
Email ThisBlogThis!Share to TwitterShare to FacebookShare to Pinterest