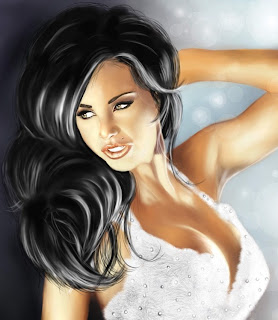 The Princess delighted to read of herself
In pamphlet, and gossip, and papers
Of her exploits quite often the night just before
Whose details quite gave her the vapors
For company each morning she had many mirrors
Where she’d dream with the utmost affection
Of the love that she held for the love of her life
Simpering back through the power of reflection
Her beauty so lauded in each printed word
Her beauty she’d cry, was a curse
The most wondrous creation in all of the land
(So it ought, since it came from the purse)
At times on inspection she’d let out a cry
At a wrinkle (a flaw that was barred)
It would be taken away with a cry and a curse
To be placed far below under guard

Not a clock was allowed, nor a calendar hung
Without time there could never be rot
Each day was the same so that she remained so
Her birthday she had ordered shot

Her youth had been famous for decades now past
All that time in this city, she reigning
A nip, and a tuck, and a big bloody saw
Of the Princess there was little remaining

Where once she had struggled in corset and wasp
For her beauty then ever near fainting
Yet the mirror assured her, she remained ever young
Even if the mirror, in truth, was a painting
The Princess whose beauty a fact set in law
Was a singer, a writer, a sleuth
(All things really done by uglier hack
For beauty could make its own truth)
So she sat and admired herself through the day
Knowing not one minute a doubter
Ignoring the sounds from under her bed
Where lurked our brave hero, our Grouter!

The young man whom so far, you may well recall
We have swooned to his adventurous deeds
In his quest for that prize that beats in his heart
Or his trousers, to see to his needs

‘I come,’ he declared. And he had, as they say
On the carpet, the rug and veneer
‘Sorry,’ he said as he wiped on the wig
‘Is the Beautiful Princess not here?’

‘I admire your wit,’ the Princess declared
‘I admire your youth, and your pluck!
‘Tell me your quest, your desire, in a word...’
‘Nah,’ said Grouter, ‘I’ll be all right.’

The rhyming disturbed he backed under the bed
Like a fawn to the tiger, in a shrub
He hid until alone he might safely emerge
And creep like a thief to the Club

Where the Angel, the Boffin and Vixen had gone
To throw shapes on the brightly lit floor
To pray long and loud at the temple of dance
Though his name they had left on the door
Posted by Alan at Thursday, August 02, 2012
Email ThisBlogThis!Share to TwitterShare to FacebookShare to Pinterest