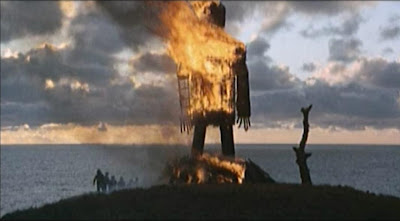 We found out today what this year’s Royal Institution Christmas Lectures will concern. Further that BBC4 will show them. For the last I am extremely happy as I otherwise nervously scan the bumper Radio Times in December hoping that they’ll actually be shown at all. Because if they’re not to your mind a British institution (they are, it’s in the name, but) then you are wrong. That was very internet of me. For my next trick I will stay up all night scratching myself with green bacon fat because someone I will never meet disagrees with me. With multiple exclamation marks.
This year it’s chemistry. This year that means blowing shit up. I’m all for science demonstrating stuff by blowing it the shit up. If I had my way all science would be converned with blowing things up, shit or otherwise. Probably not biology thinking about it, but that’s not a real science. I did it at school. It was drawing. Science is about maths, which is why I should probably not have seen eye-to-eye to it – especially physics, but which because I had the same physics teacher for five years I enjoyed heartily, all the maths aside. He was a very good teacher (which neatly brings us back to the Christmas Lectures).
There is nothing wrong with taking important subjects and covering them in a way in which children can understand them. Hell, it means grown-ups can enjoy them because no one is an expert on everything. Even that person who I will never meet who ruins all the bacon rind in my house. No matter how many exclamation marks he uses.
My eldest had been watching them for the last two years. Yes, initially it meant staying up after her bedtime but firstly, it’s Christmas. And Christmas is a Big Thing in this house. And secondly, seriously, the Christmas Lectures. She might not follow everything – or not then at age six, but she learned enough. And wanted more. Which is great because she’s convinced that I know everything (and I’m not always that great on stuff normally covered by the Christmas Lectures).
So this year Dr. Peter Wothers is going to blow stuff up.
And if he doesn’t, well that’s all right too. Because I know that he’d like to really.
Roll on Christmas.
Posted by Alan at Sunday, August 19, 2012
Email ThisBlogThis!Share to TwitterShare to FacebookShare to Pinterest