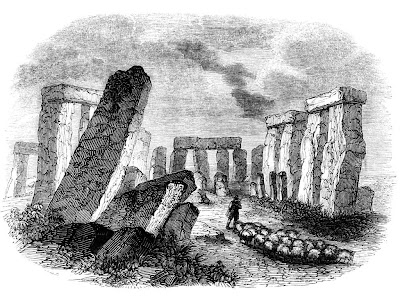 Exciting plans were revealed today by British Heritage to make a visit to Stonehenge more awe-inspiring we learned today. Complete with a new visitors centre at Airman’s Corner the ancient monument is set to revel in an expansion to the site from being what even to this day is considered by many ‘just some stones in a field’.
I lived right near the henge for a few years, indeed just down and up the hill from Airman’s Corner in the lovely Shrewton. My beloved Q worked there at the same time, and they were happy times indeed what with me enjoying the odd conversation with an adult and once in a while going out. So to top it all I’m going to miss out on the plans that have been sent to me today. These set to change the views I witnessed there by tourists (who having come all the way from Salisbury to view the stones expressed delight in finding out that the stones, were stones, in a field). Whilst until late last century considered to be set there by the Romans, as was anything, ever (bloody Romans) Stonehenge was not as it happened made by aliens. Rather it was raised by people that having only stone to work with were in fact pretty good at it.
Now we are promised hourly dancing girls dressed like Raquel Welch that will catfight before wobbly rubber dinosaurs. Stone sleds will whip people across Wiltshire’s largest planned rollercoaster. Jobbing archaeologists will chase Tony Robinson in a JCB whereupon the hapless drama student standing in for him will be trowled to death for the delight of audiences. There will be beaker-cup rides, re-enactments of local people through the ages swiping bits for their cottages, and the A303 will be wrapped in brown paper for two miles in either direction so as to no longer give away the site of the stones, in a field, for free – and visitors will be invited to kick a hippy in the restored beanfield.
As a finale visitors will view Stonehenge as it was originally - lovingly restored as a landing pad for flying saucers.
I lied about the aliens.
Posted by Alan at Tuesday, August 21, 2012
Email ThisBlogThis!Share to TwitterShare to FacebookShare to Pinterest