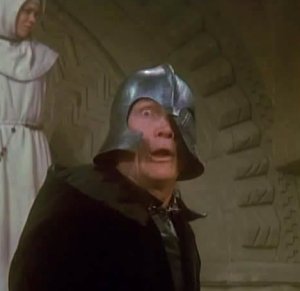 To her surprise, he seemed annoyed. E. M. Forster

The Merchant Ivory production of Hawk The Slayer (famous for being one of the few films not to make it to DVD from video) is finally out on Monday. The 1980 classic stars in an early role Helena Bonham Carter (daughter of famous hard man Jack Carter) fled to some fantasy realm or other in the wake of her father’s violent death on the Newcastle seashore. Despite, or perhaps because of, her heritage Hawk (Bonham Carter) has been brought up in a strictly English upper-class home. Probably by elves.

Offered a room with a view Hawk begins a journey of realisation and maturity with the aid of an elf, a dwarf, and Bernard Bresslaw. Shocked when Voltan, an English gentleman (Jack Palace) grimaces and grunts his way through a dry stool passing for conversation she is left with her reputation in tatters when (contrary to the views of Edwardian society at the time) he fails to marry her, having spoken to her. Swearing revenge she takes up her father’s sword, a magical weapon that shoots out its many blades; although that might have been Krull. In a climax involving the breaking of an engagement, everyone dies despite the elf being able to fire many times due to each shot being replayed rapidly.
The film ends with Voltan’s death in the Italian pensione where the deed was done, in the room with a view.
One of the very few films at the time open to young men that had read Tolkien it has in more recent years forced even the most determined to admit that it was, realistically, a bit shit.
Posted by Alan at Saturday, June 23, 2012
Email ThisBlogThis!Share to TwitterShare to FacebookShare to Pinterest