Joe Swash To Host The Sky At Night 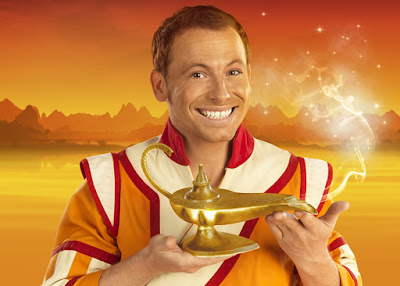 Sky At Night is to be given a facelift as part of the BBCs continued strive for excellence, impartiality, and relevancy in society. The Sky At Night (the world’s longest running television documentary with the same presenter) has seen musician Sir Patrick Mower at the helm since its inception on the 24th April 1957. Mower’s qualifications for the role can hardly be faulted and indeed were the likely reasons for his more famous role as Captain Jean Luc Pickard in dribbling science-fiction fan-favourite Star Trek; We Surrender. But in order to make astrology more widespread than fans of Brian Cox’s recent series on star signs, tarot and candle-magic bold moves have had to be made.
I was privileged to be sent an early draft of the new format now to be fronted by celebrity king-presumptive Joe Swash. Swash, formerly starring in EastEnders as well-meaning but fumbling buffoon Mickey, and winner of 2008s I’m A Celebrity... Get Me Out Of Here is noteworthy for achieving every actors dream of nearly constant work on tele without ever having to act at all. It is thought that Swash will bring a warmth and appeal that the former presenter Sir Patrick Swayze has in recent years been criticised for lacking.
Here’s Our Joe (presently unaired) on the subject of meteorites:
‘It’s a natural object what falls from space. Not to be confused with meteoroids, which you can get cream for. Space is even bigger than London but ain’t in London, in which is mostly nothing, which sounds like something that ain’t in London. There ain’t no panto in space. But there is lots of nothing. Sometimes this nothing falls in places like London, but mostly not, and when it does it’s called a meteorite. They have been found on the moon, and on Mars, but my mate Dave says the government knows more and they are probably space alien landing craft. My mate Dave says they should fuck off back home. I don’t ‘cause I love everyone, and my mum. And that’s swearing that is. When they come to earth they make fireballs. Bloomin’ Nora there’s fireballs falling on us from space! But basically they’re rocks what fall from space, or don’t ‘cause I’m told it’s gravity, so it’s more an attraction really, it says here. Gravity was invented in 1687 by Isaac Newton so there weren’t any before that. Meteorites are of three types. Stony ones, iron ones... and stony-iron ones. Strewth, can’t they come up with better names? Like, I dunno, Joey ones, Swashy ones, and Joe Swashy ones?'
My mate Jerry’s head is set to explode in two weeks time when the new format The Sky At Night will be shown in its new slot, 4.30 on CBeebies.
Posted by Alan at Sunday, June 10, 2012
Email ThisBlogThis!Share to TwitterShare to FacebookShare to Pinterest