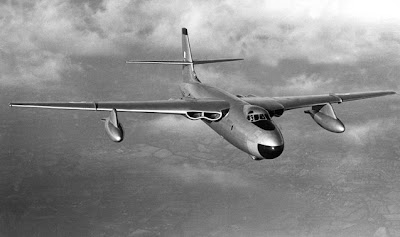 If it didn’t fly it fell apart, panels banging like allotment sheds in the wind. How it came be here was less of a mystery than how it had landed at all, the pale sides and wings of the old Vickers Valiant painted so as to reflect the blast of the A bombs as it passed away over Russia. I still think of the Soviet Union as Russia. I once met a radio ham down Evesham way that had occasional contact with the country and here some years after the silly little war. Neither spoke the other’s language but according the ham he seemed like a nice chap. Mme. Roux judging my mood suggests that the Valiant never flew at all, though how it came to be half pushed into the barn now no one cares to speculate.
She’s humming the Blue Danube, which Captain Cecil finds enormously amusing. I confess the joke eludes me. The V-Bomber force was Britain’s great deterrent. It remained so for at least four years before the deterrent became a detriment. All those old nations with their atom bombs cruising about on patrol it must have been like dodgems up there. And neither had anywhere to land as everyone went for the airfields first, this perhaps the last and there are chickens in the bomb bay.
“So what will you do now that you no longer have an army of the horrid to conquer and compare?” Mme Roux wants to know. I’ve been relegated to the duties of cook so it’s eggs for tea.
Captain Cecil taps his nose. I never liked him when he looked set to bring the sort of order loved by the idiot and the knave. I like him even less now he’s doubtless thought of something better. I suppose I should be glad. His army of ruffians would have been worse than brigands sweeping across the land. At least brigands don’t believe they’re doing it for some higher calling. The sum total of people eager to grab hold of the first good cause that can be explained in words of no more than two syllables has dropped sharply. Two doors over before the bombs fell my neighbour Mrs. Speight used to lose her milk some mornings, right off the step. She would blame (in that irritating hiss of static always in the background of party or post office queue) Mr. Shergil for that, and indeed anything else that occurred. Mr. Shergil worked on the busses and had won a medal at Monte Cassino, one of 100,000 Sikhs to fight for the British Army in that war. I couldn’t help thinking even at the time that having lost an arm to German mortar fire he probably had better things to do than steal milk, but that was Mrs. Speight. Mrs. Speight would have voted for Captain Cecil. Not that Captain Cecil, or what he had represented, had really been much concerned with election results.
With all this in mind you will perhaps think I would be glad for what happened, what this pair did? Cleverly bringing a big bomb into the camp used by Cecil’s nasty little army and with it blowing up the majority whilst they waited in line for their supper. But I don’t. Ends simply do not justify any sort of means to me. I’ve heard that tripped out any number of times and never by anyone I might once have included on my Christmas card list. If Mme. Roux and Cecil showed now any sort of remorse, any scrap of worry, any shuffling of the shoulders under the burden of what they had done then I might feel differently to how I do now. But they’re too busy chuckling over their own cleverness for that, enjoying the same worn out joke like the grammar-school boys I once taught reciting Kenneth Horne; their bad impressions as irritating as their repetition.
So I hope they both like their omelettes.
You can’t make them without cracking a few eggs.
Posted by Alan at Sunday, June 17, 2012
Email ThisBlogThis!Share to TwitterShare to FacebookShare to Pinterest