Last Of The Breakfast Glee Club 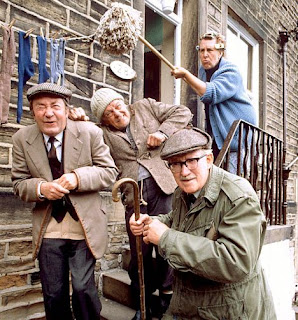 Possibly in a reaction to a middle-aged woman (not-Buffy-actress Jennifer Garner) being cast as Miss Marple old people everywhere are feeling smug with the announcement that the remake of The Breakfast Club is to star amongst others Compo from Last Of The Summer Wine. Compo (forced to retire from the hit series upon the death of actor Bill Owen) is set to play the role made famous by Judd Nelson in 1985, that of blow-dried criminal John Bender.

With the first of the publicity shots released this week (that above showing Cleggy as the ‘Brain’, Foggy as ‘Athlete’ and Nora Batty as ‘Princess’) Hollywood has been forced to lash out on a bag of chips to employ real writers to write real plots. The remake has already caused outrage amongst fans of John Hughes’ seminal work when it was revealed that whereas in the angsty original five disparate high-school kids bond through unlikely hash smoking and sexual harassment, in the 2011 version old people fall down hills in bathtubs.
Already anticipating success Fox have announced a reboot of hit TV series Glee, this time starring Blakey out of On The Busses being given wedgies by Battery Sergeant Major ‘Shut Up’ Williams from the 1970s BBC comedy It Ain’t Half Hot Mum, of which Glee is itself a modern reboot.
Oh therefore, the irony.
Posted by Alan at Tuesday, April 05, 2011
Email ThisBlogThis!Share to TwitterShare to FacebookShare to Pinterest