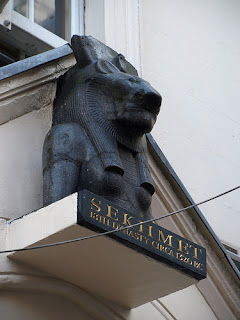 Set over the entrance to Sotheby’s in New Bond Street, the bust to Sekhmet is hardly the subtlest clue to the Cult that has been growing in London in recent years. It’s been long established that Harry Potter, Iron Maiden, Ingrid Pitt and Real Ale all lead to various forms of devil worship. Since ancient Egyptian myth and Satanism are lazily sort of the same thing young men have here joined with older men in the worship of Sekhmet. Meeting as ancient scripture describes on the third Thursday of each month the Sotheby Cult ranges the nights of Mayfair and Piccadilly.
The cult has actually enjoyed greater popularity since some old shit by Dan Brown was read by people for whom a simple thriller was not enough, and who on joining the Freemasons discovered that mostly what they were expected to do was charity work. Confusing reality with an episode of The Simpsons, missing therefore even the false promise of giant rib dinners and never able to enter the United Grand Lodge of England due to Spooks using its entrance for that of Thames House, the Apprentice Toast Racks (the lowest degree of Freemasonry) have been lured instead to the worship not of a Supreme Being, but a mostly forgotten one. A forgotten one perhaps, but one that was an alien in the classic Dr Who episode Pyramids of Mars. Although that was actually Sutekh.
The Cult only awaits a decent opponent, a Holmes or a Richard Hannay. In these days of digital-everything suitable bold adventurers are difficult to come by. Indeed only Kim Newman has been judged even vaguely suitable – but you have to email Kim Newman and he’s long since given up even opening messages from Cults looking to be opposed.
Still, Ingrid Pitt eh?
Posted by Alan at Friday, April 22, 2011
Email ThisBlogThis!Share to TwitterShare to FacebookShare to Pinterest