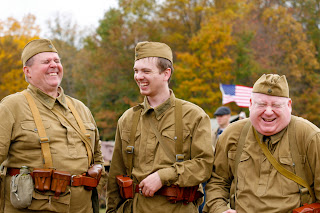 With the fine weather and here in Tolly Maw it seems we are required to roll across the Rhine in a race with NATO to see whose cruddy old armoured vehicles break down first. Or at least we would if we were not already in England where we are the Wiltshire & Cumberland 23rd Motor Rifle Division. Well not me obviously. But everyone else and here photographed with some sort of phone I don’t have are Tom, Young Tom, and William The Murderer.
Back in the 1960s Tolly Maw was used for build-up training in FIBUA, the techniques then known by a different name for shitting oneself blue and screaming in village, town or even city. Meant to get young squaddies used to the idea that if there was a door to be kicked or a mine to stamp on stripes and pips meant ‘not me’, it carried on the proud tradition of National Service whereby young men learned how to skive.
Legal documents were served informing the people of the Tolly Maw of the fate of the village. The people only too happy to help readied themselves and then successfully repelled the first platoon sent to the training, not expecting as they were to be fired upon. Or for the village to have a tank, three in fact. Even when Ian Carmichael (the British actor famous at the time for always playing the least offensive of civil servants) was sent in with a brolly and a stammer the people would not be moved, for they were Soviets three weekends a year and this was the first.
Not since 1982 has there been any actual fighting. When then the Falkland Isles were invaded by Argentina Tolly Maw was sealed tight in case it offered aid to an enemy that everyone thought had landed just off Scotland.
So this weekend and everyone but me has all gone a bit Soviet. And here is our potato. We have many fine potatoes just like it, just not here comrade.
Posted by Alan at Wednesday, April 20, 2011
Email ThisBlogThis!Share to TwitterShare to FacebookShare to Pinterest