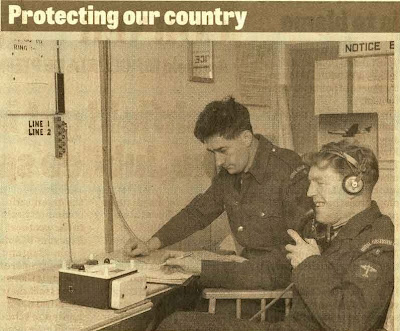 It was in the Royal Observer Corps that Cecil first tasted the power of a uniform.
He had been a little too young for the big war. I can’t imagine him scampering about the craters hunting for bomb fins or shrapnel for souvenirs though he assures me that was the case. I know he was sent out as a refugee but like many ran away, ran home and (a shame though it is for the narrative of his story) to find his family perfectly well despite the blitz. He was excused his national service though he will not say why, only that it did not please him to do so. So he volunteered for the ROC which was as well since it was a volunteer organisation. Uniformed by the RAF they continued their work from the big war, watching for raids and waiting for the bombs and in his case his post was in the most extraordinary place; the Brunswick Tower atop Windsor Castle. The first time he reported for duty he says he jumped a mile when the bear-skinned sentry snapped a salute.
Our late Queen having been taken up there as a girl by King George still made sure that the little ROC post was kept supplied by the royal kitchens. Cecil claims it was the only post across the country that did not have to take in its own sandwiches. He tells me now that it was lucky that with the advent of V bomber and mushroom clouds the post was relocated, he to a much smaller affair on the outskirts of the town. There with two others in their tiny little cellar dug out of the ground they waited each night in shifts just in case... well, just in case what happened did I suppose.
“That night,” he says, “I was the second one in. There should have been old William too but he stayed with his family. We of course knew how tense things had become. But it was still a surprise to Larkin and me when the BPI meter went barmy. We couldn’t see a thing but had to ring in with the instrument readings. I can’t imagine how they couldn’t have known where the bombs had dropped but still it wasn’t official until we and others just like us read of the readings and telephoned them in.”
“It must have been very frightening,” I say.
“Not really. You were so removed down there and we weren’t very close. I remember my Maisie hadn’t put the pickle in my sarnie.”
“How did you endure it?” I say hardly bothering to keep the contempt from my voice.
“It was the smell that was the worse. We had this little toilet and it had never really worked. We were down there for days opening tins from the last war and occupying ourselves with ludo. Thing is, the telephone system went down during the first wave. So I suppose officially there was no little war. All rather pointless really.”
We’ve been waiting for the Chelsea Hunt to go by. Telling stories; well Cecil and I have been. Mme Roux is standing like a shapely Gog or Magog above the city and daring them to see her. There’s a bonfire on the building opposite and it’s making her tight little curls red in the night. Seeing her it is as if we are witness to Lucifer paying a call on his kingdom, only in a flying jacket and corduroy.
I say, “How long do we have to remain here?”
“Not too much longer,” says Mme Roux. “The Hunt has just entered the theatre below.”
“They saw us?” Cecil wants to know.
They ought to have done, I think to myself. The awful woman had been waving at them long enough.
Posted by Alan at Wednesday, October 10, 2012
Email ThisBlogThis!Share to TwitterShare to FacebookShare to Pinterest