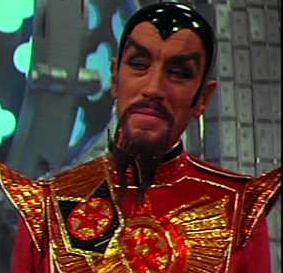 The vicar came round this afternoon, which was nice, and as we sat and chatted to one another in our best Alan Bennett over milky tea and a nice digestive he tried to recruit me. I don’t mind this sort of thing. I was baptised and confirmed as a youngster, by the Bishop of Winchester no less for the second. I’ve definitely fallen from the path but the more some people slate off Christians the more I feel inclined to dust off the old jumble-sale attending trousers. Nice people in my experience and hey, back when I helped out at the Big Issue it was the local church whose drop-in centre we used whilst they fed the homeless. So you know what, I like the church – and screw you iReason! There, see what you made me do? Exclamation mark. Man...
...But no. And here in Tolly Maw then I was quite excited to find out that the vicar was Roger Delgado. Doubtless keen to tempt me into devilry (the like of which I’d have had to turn down on account of my back). He laughed that off and I thought for one horrifying moment that he was going to suggest Cthulhu, like Petri down the little shop goes in for, with his lisp. No again and much to my surprise he explained that he, the vicar, was also the Emperor of the planet Mongo.
‘The Reverend Ming?’
‘The Merciless.’
Not Roger then. Which was lovely and yes Peter Wyngard was his curate, just like in the film. I’d suggest you must have seen the film. Everyone has. The one where you recall Queen do the soundtrack - unlike Highlander where you never do. So that when Highlander is on tele you think ‘Gosh, the first film was actually jolly good, I’ve not seen it in..?’
Yeah, there you are. Right there. It’s A Kind Of Magic. Brrrrrrhhh.
Reverend Ming goes on and steals all my biscuits and I think I might have to break out the Bourbons, and I can’t for the life of me work out why anyone would want to follow Ming the Merciless?  He’s going on about destroying this world, destroying that world, the shocking state of the tribute from the wet James Bond and Mr Shouty (this one with wings), the organ fund - and I can’t see it. I can see why Peter Wyngard does it. He gets the metal mask and he was looking ropey as Jason King even back in 1972. So much for Mr Winegum. What about the rest of us? 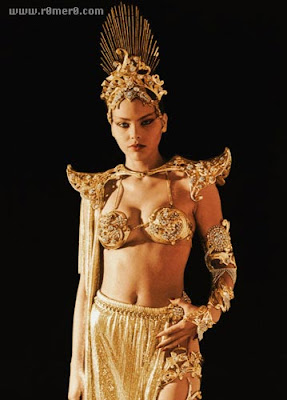 Well there’s always Ornella Muti.
‘Fah lo Suee, she who is as beautiful as she evil. Or is that deadly?’
‘That’s the daughter of the Devil Doctor,’ protests the Reverend Ming. ‘I’m not Fu Manchu.’
We agree to differ.
He’s not Roger Delgado either (and I tell him to come back when he is).
Posted by Alan at Thursday, June 09, 2011
Email ThisBlogThis!Share to TwitterShare to FacebookShare to Pinterest