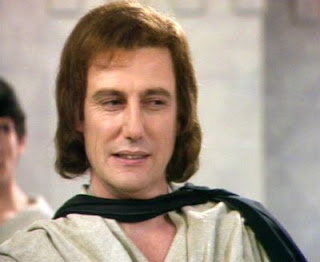 Following on from the success last year of the RSC’s production of Blake’s Seven Ages Of Man that treasure of stage, screen and audio-production Paul Darrow has released advance notice of his latest foray into classical theatre with Jane Avon. In begins with the young Miss Avon witnessing the destruction of her homeworld from the Federation induced typhus epidemic suffers through a first act composed mostly of consumption and Jane’s growing ability to hack into pretty basic computer systems that nonetheless fly starships.

Falling into company with the dashing Paul Darrow, Jane Avon learns of Paul Darrow’s previous marriage to a mad muto and vows to discover a fortune for herself with which to save the brooding Paul Darrow from his cursed past, probably to do with Star One. Paul Darrow, a Byronic figure, is freed at length due to Paul Darrow’s muto wife setting the Liberator on fire and shooting herself twelve times with a gun that looks a bit like a hair tong. Paul Darrow and Paul Darrow marry, or something, and run about a quarry a lot.

Jane Avon is set to run for six weeks at the Paul Darrow Theatre, Paul Darrow-On-Avon.
Posted by Alan at Friday, April 06, 2012
Email ThisBlogThis!Share to TwitterShare to FacebookShare to Pinterest