Nicely Pink In The Middle - Teaser

You can lead a horse to water but a pencil must be lead
Phoenix Cinema, East Finchley. 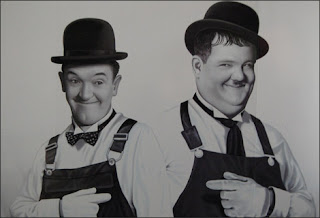 He only ever felt alive when he’d had that first piss, and by habit in the popcorn. Fumbling with dungarees and work belt, saw, sabre and pistol Arthur tried with one hand to do the work of three. A thin man and all chin he had an idiot’s smile. The idiot would never miss it. The crowds had gone. The usherette had gone. The lights were all from other rooms, an elsewhere light that gave the stairs a borrowed glow. Arthur needed to kill like another man needed to eat. That other man Norvell, much fatter, watched Arthur fumble, drop first saw then sabre. He shook his head, ridiculous. Fetching a scoop he helped himself to popcorn.
He said, “You’re a fool, if I had any sense I’d walk out on you.”
“Then it’s a good thing you don’t have any sense,” said Arthur. Dungarees now buttoned he looked about for his saw.
“It certainly is.”
It was later than the late showing but early for Norvell and Arthur who had only been Norvell and Arthur for the last reel. The one looked at the other, pleased as he picked up the saw. His sabre next, and with tools in hand he fixed up his smile. Arthur said, “Can we find someone lonely, someone lost. Someone who will be missed?”
Norvell nodded once and firmly. “I could kill,” he admitted.
The curtain goes up tomorrow
Posted by Alan at Tuesday, December 13, 2011
Email ThisBlogThis!Share to TwitterShare to FacebookShare to Pinterest