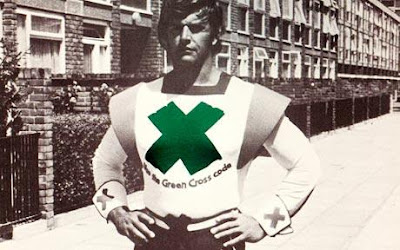 The Green Cross Man, Britain’s only superhero. First appearing in the mid 70s amongst a turbulent nation, the GCM died yesterday in a rented flat in East Cheam, London. Named by the Daily Mirror in their expose ‘Julian’ was officially the only successful subject for the RAFs White Summer project. Outed there in 1977 as a former soldier, when first released from the project it was as a bodyguard to one of its Steering Committee, F. Alexander. In 1988 the award winning Stop, Look, Listen (Bolton/Dimbleby) for C4 went into further detail of the scandal, of the ‘Black Mountain Side’ that followed on from the already exposed White Summer, both based in RAF Rendlesham.
I remember the Green Cross Man (playing on the rural folkloric figure of the green man, formerly a trickster sacrifice but here more vengeful, angry, ‘cross’) changing the world. I was seven or eight at the time and whilst to some now teleportation and a West Country accent might have always been commonplace then for us it was a shock, but one that like all such things soon wore away its shine. It seems laughable to think now how the world changed that day when The Green Cross Man was first shown on the news using his power to make sure that children looked both ways before crossing the road.
Whilst we now know that the serum for teleportation is produced in root from certain brain stems that was just another revelation of the C4 documentary. Now of course with national teleportation as common as walky phones in my own dear Tolly Maw that which we take for granted has led us to become a nation of fat bastards.
Sad indeed in the face of who started it all, Julian, who was discovered this morning, hung in the room two over from where he was found.
Posted by Alan at Wednesday, October 12, 2011
Email ThisBlogThis!Share to TwitterShare to FacebookShare to Pinterest