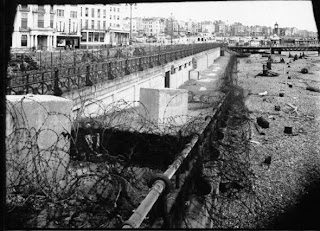 Brighton Beach, Two Slides from True
The bones of Pier 1 are lit up by the Panda pop fizz of Pier 2. It’s burning with flares, fires pogo dancing. Some rise without a sound, not even a pop as they go off halfway between here and hell. Pier 1’s shadows are butterflies. Briefly the pier is dark, darker than the evening. Closer to the flares the Albion Hotel is lit orangeade, and bubblegum blue. We’re on the beach a mile from Pier 2. A Wessex blows by but out to sea, rotors turning but tired. There’s no sand, and the ice-cream though sticky doesn’t melt. We’re on a two day leave from the ‘Nam, Cheltenham and on the road Triffids in kiss-me-quick hats have staked out the gents.
‘...The man’s enlarged my mind,’ says Harley. He’s educated, he knows all about the green. A farmer without a farm, worshipping the earth, he’s one of the Colonel’s children. We’re not far from the Downs here so there’re a few like him. I like that. Griff’s being condescending about the enthusiasm, but I like it that there’s fire still somewhere. You can see it in his eyes where the flares reflected light dies a little after it falls into the sea. He’s speaking with his hands, ‘He’s a warrior poet in the classic sense. I mean sometimes he’ll... ah... well you’ll say hello to him, right? And he’ll just walk right by you. He won’t even notice you. And he’ll suddenly grab you, and he’ll throw you in a corner, and he’ll say; do you know that if is the middle word in life?’
Griff’s not listening. On the beach and apart from he and I, and Harley, there’re two medics. Two surgeons. Girls too, one’s a Kiwi. The other’s married to Harley and she might be Greek. It’s the hair, like on a statue, only with beer. They're the only girls in a half mile not dressed for a parade and are all the prettier for it. Griff’s been taking aim at one of the Triffs for a minute now with a big old FN self-loading-rifle, metal and wood, chopstick bipod and iron sights. He pops a hole in the base of the Triff’s stem and the weight forces it to fold. The Triffs try and reach us but they can’t cross the pebble beach. Griff’s happy. He sits up and lights up, smile and a cigarette, leaving the rifle where it is. Naked but for a filthy pair of shreddies his canteen now empty was full that morning, vodka. Sometimes he slips into Russian. Mostly just a little, like nadsat, like a character too much for a Clockwork Orange.
The girls watch the flares, chins following each up and halfway to the sea. The Kiwi, Mel, is wearing sunglasses. Greek Helen’s stropping a knife, one of those funny curved ones you only see in surgery. It’s a rectal knife she said, before I asked Harley about Colonel Ray. They could be treating Triffid stings and shrapnel wounds. Earlier they told us about a man with a tennis ball up his arse. Thus the rectal knives. I’d asked if they couldn’t have cut the ball? But they’re surgeons and they cut people, and they’ve not got a tennis-ball knife.
‘You heading back?’ says Mel most amused. She means the hotel. In the Albion travellers and investigators from the Slides are gathered together. There’s beer but it’s nasty, and the beer’s the best thing about the hotel. You can pay for the rooms by the hour. Handy for tarts, but there aren’t any tarts. The windows of the bar are cloudy where someone tried to wipe away a few pints of spunk, but not very well, and none of it human. The Albion is like Maplins, but without the class. I shake my head. It’s just one of many things I have to do here, and one of those is sit on the beach whilst Griff pops Triffs. I’m not staying at the Albion and for some leaving might not be an option. The rooms absorb people. The ghosts aren’t dead and I hear all the staff were residents at some point too. No, Modesty’s given us the run of her townhouse.
Griff lies down to shoot another Triff. We’re running low on beer. Everybody’s happy now, everybody’s singing, everybody’s happy now – we’re bulletproof.
It’s dark when Pier 2 goes up. Caught in the explosion the guests at the Albion can be heard cheering. Not so far away the Lanes will be jumping. It’s October and we’re dressed for summer. It’s late and the Albion is going up a treat.
We go for Tapas.
Posted by Alan at Tuesday, October 04, 2011
Email ThisBlogThis!Share to TwitterShare to FacebookShare to Pinterest