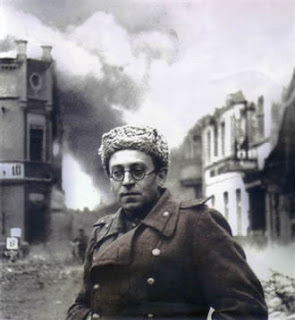 “The parable of the scorpion and the frog falls rather flat when we know that in nature frogs eat scorpions. How the scorpion must blub! 'I have yet to journey to where in stinging you we both die', he is desperate to say - 'for I am the scorpion and it is in my nature'. 'I wouldn’t know about that', says our frog and eats him because that’s what really happens. Is there a lesson in that?”
I can’t really say and so fall back on a faint smile. I’m really quite scared. I suppose I must look out of place here with everything so orderly and I such a state. Once fields and now a camp where despite the mud the rows of Chieftain tanks, Ferret scout cars, Saladins, Saracens, Humber Pigs and others I do not recognise are all freshly scrubbed. Indeed still now some are being hosed and tended to with brush and broom. I cannot imagine how they will fret come autumn and the rain, when dust will become mud.
I can see lines forming by what I suppose to be a cookhouse. Everyone alike is dressed in overalls, green or black with coloured armbands whose meaning I cannot discern. Yet there is order and into which Bon Bon so buffed is very much the debutante.
“I have to say this is all very impressive.”
Captain Cecil nods at Mme Roux's words but looks at me. I’ve heard of him of course, and of his little army (though I’d not have called it little any longer). Ten years ago and Cecil was much like Bittersweet. A raider and a hoarder but in Cecil’s case he secured his plot and then his land with the sort of men and women who rather than fear brigands, raiders and robbers welcomed the chance to fight them. More gathered to him, or surrendered but for a long time there was ever another tribe nearby until he swallowed that too. Now he is one step below a feudal lord, yet calls himself only ‘Captain’, and that I suspect only under sufferance. Such a small, slight sort of man too, almost ineffectual and so neatly dressed, though not in the uniform of his followers. He says, “Tell me, what do you think?”
“Of this?” I say.
He makes a gesture as if to suggest that I might make my own mind up. Otherwise he does not reply. Mme Roux is also looking at me now, eyes urging me to say something.
So I do, “It’s awful.”
Cecil purses his lips, he looks amused. He says, “But we are the strongest, the most feared. We could restore Britain, we could...” but he stops when a whistle sounds. Those not already queuing for the mess hall hurry to do so now. “They would make me leader, and better I than most others,” he looks back to me. He says, “I have done some dreadful things.”
That too is true. Mme Roux might wear her reputation like a cape but Cecil’s is a cowl. Though he is alone here with us and his army however impressive in the distance it is I that worry. He is smaller than I. He is smaller than Mme Roux. I still have Bittersweet’s revolver. But he has not walked the land to leave it smoking, crying, suffering even. I have heard stories of drowning, and knives and (I look now at his bony hands) of throttling. But all of people I’ve never met or can recall much now. Always people like he, or worse. Or better, I do not know. And Mme Roux has come to trade away her bomb else have it taken from her.
Posted by Alan at Tuesday, October 11, 2011
Email ThisBlogThis!Share to TwitterShare to FacebookShare to Pinterest