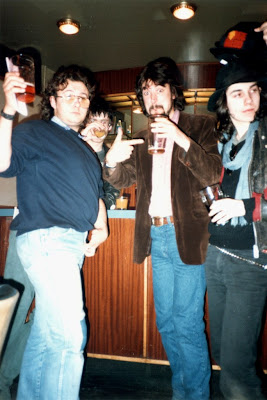 25 Years ago, Moz, Simon and... golly, how pretty was I?
Damn the 80s, damn the whole decade to hell!
‘That’s a very broad statement,’ says Mme Roux. She’s arrived to regale me with her exploits, two days early and already occupying the sofa. She brought quite the biggest tree the house can enjoy and the family are decorating it. Already there are plans for biscuits to be baked and threaded with ribbon. I like rock cakes best but they never hold together for this sort of thing. ‘It wasn’t all bad, surely?’
It wasn’t. In the 80s I made very good friendships that have lasted me to this day. Halfway through I ran cheering from the family home. I got to hang around, see a lot of music, play some bloody good games and starve during the week whilst working down caves at the weekend. But the 80s were also my teenage years, and the music was just, bloody, awful.
It hardly seemed fair. The 80s were quite literally from one end to the next my teenage years as I say. Before that and there was Zeppelin, and Tull, and The Who – then the Pistols, and the Clash. And I missed all that because I was swanning about like the lost member of the Double Deckers, probably on a chopper push bike. Then the end of the 80s came and suddenly everything musical was wonderful, and we only half knew it at the time. Whilst a lot of the bands were also 80s, the late and then the early 90s was where they came good. New Model Army, Back to the Planet, Tofu Love Frogs, Sensor, Levellers, PEWI, Carter and even the pop music was Blur, Elastica, even Pulp. There was trance, ambient and lots of dub. All these different genres, all good, all at the same time. And it was always sunny. But that was the 90s, and this was the 80s.
‘So the soundtrack was rubbish?’
But the friends were the best. Still are. Three decades on for some, Andy and Maurice, Jerry and Rob, Lurch, Saz and Simon. Seven and more, we could have been hired to save Mexican farmers from cruel banditos. Or been samurai, but let’s not be silly*. I don’t see them enough, I’m too far away, but it’s Christmas and I miss my mates.
Mme Roux digs in a pocket. There is a photograph. It’s a quarter century old but there we are, three of us and of course by the bar.
So cheers all, and bottoms up.
*Because Sweet Lucy was a dancer, but none of us would chance her, because she was a samurai.
Actually Jerry dug this out. Mme Roux must have nicked it.
Posted by Alan at Tuesday, December 13, 2011
Email ThisBlogThis!Share to TwitterShare to FacebookShare to Pinterest