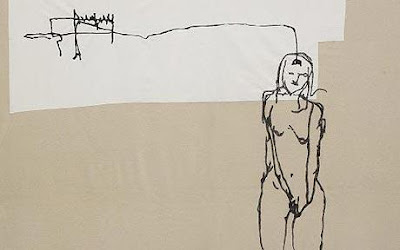 Will Self has reduced himself to misery and the inward sucking of his tears sounds like an emergency tracheotomy. “Fuck him,” says Will Self by the fire. The two of them have fallen out badly. “The lamentable little excrescence isn’t fit to lick effluence from my ghastly shoes.”
2012 went out as it deserved; annoyingly.  I had one can of fizzy beer and that had a fag end in it. I got to bed at early o’clock leaving the party still muttering along like a lot of old aunties having learned that parma violets are no longer to be made, kidney is no longer compulsory in steak pie, and that menstruation has become optional. Even then Will Self was cutting the air between himself and Will Self on the matter of breadcrumbs, Kingsley Amis, and wet bread. Tracey Emin crawled from the hollow in the sofa to chant ‘fight, fight, fight’. The problems with the Selfs are all her doing, I know full well. She can’t take the two of them and so early in the evening took the last the ready-rub from Will Self whilst he slept and sprinkled a few flakes over Will Self. She’s still trying to lure Will Self to where Shelob will do the dirty for her. Right now and she’s still up whilst I try to make the tea. She’s sitting on her haunches gnawing at frozen fish fingers, naked but for some torn Westwood fashioned into a hat. Tim Westwood unfortunately. All over the wall she’s used Vim to make little sketches on the toast-stained tiles. They’re rather good.
I’m avoiding the bathroom, it’s still dark so the hedge made for a very reasonable urinal and a wild-wee on a clear dawning morning in the country is one of the few pleasures available to man old and young. The bathroom is littered with the party balloons that someone has been using as condoms, unsuccessfully as mostly what is left is a lot of little rubber rips that wouldn’t have served a tomcat. I’m not going to make any judgements but Greg-Wallace-off-Masterchef asleep upside down on the stairs has a balloon jutting from his flies straining with all the piss that’s still filling it, a tap with a worn washer. New-year parties, I never plan them and I rarely stay (even if as ever they are always here).
It’s dark and I don’t want to disturb the fug of trembling semi-consciousness that has taken everyone after a night of Bacchanalian argument as to whether Cava can really be vintage? But I need to crack on with the novel assigned by my book group. I can’t even remember what it is but I’ll start on it soon by the light of Professor Brian Cox who dreamily looking towards the moulded light-fittings glows softly in the irony that being the country’s leading scientist is nonetheless also confused by many with Jesus. ‘Briiiiaaaaaaan Cox,’ he’s simpering, smiling, unable to grow a beard. ‘Briiiiaaaaaaan Cox,’
It’s 2013. Good riddance 2012, you were all in all a bit shit.
‘Briiiiaaaaaaan Cox,’
Shut up, Arwen.
Posted by Alan at Tuesday, January 01, 2013
Email ThisBlogThis!Share to TwitterShare to FacebookShare to Pinterest