There’s a lot going on beneath the streets of London. Much has also gone on there in the years now gone by. There’s nothing surprising about this and whilst I can’t find any genuine pictures of Morlocks or former tube navvies lost in a tunnel collapse and turned to ghouls feasting on anyone oddly likely to wander there at night there are a few that are favourites of mine. None of these are anything especially secret. Indeed, anyone that knows London will know some (if not all of them). My Granda Bill was fascinated by the subject, a fascination that infected me in turn and so briefly then my current top five.

Camden Catacombs. Formerly used as stabling for horses and ponies used to shunt railway wagons the catacombs are located beneath the lock, market and the roundhouse. The tunnels ran once (and for all I know still do) under the goods yard at Primrose Hill, under Gilbey’s warehouse and of course Camden. Though they can still be spotted by the iron grills that remain in the road surface they are like everything here not open to the public. Nonetheless a little enterprise on Regent’s Canal actually makes them the most accessible of all these I mention.

Kingsway. Everyone knows about Kingsway. Towards the end of the 19C it was decided to clear the slums hereabouts and the streets provided the opportunity to form a tramway across London, Angel to the Elephant. The tunnel itself can be readily seen in Southampton Row, but less well noticed perhaps are the entrance doors right on the road and under Waterloo Bridge.

The Kingsway Exchange. Kingsway again, here originally one of the deep shelters across the underground network and here at Chancery Lane. It developed into a hardened shelter, a telephone exchange that housed the transatlantic link, and is in remarkably fine condition to this day despite decommissioning in the 80s. It’s the location of Herbert’s third rats novel, Domain and the last heard I heard the site is still up for sale.

The Post Office Railway. Like some model of its larger passenger peer it moved mail between Paddington and Whitechapel, nearly seven miles and boasting eight private little stations – the main one inevitably under Mount Pleasant. Closed in 2003 (it was three times more expensive to operate than just chucking sacks in a van) it replaced the earlier pneumatic tunnels which shot letters by capsule through tubes for the same purpose. 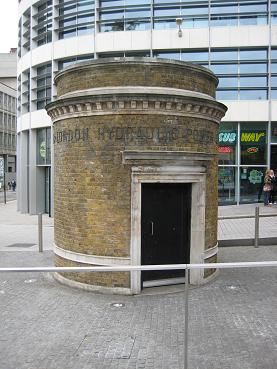 Tower Subway, my personal favourite. Still seen by its pillar box entrance on Tower Hill the subway runs a quarter mile under the river to Tooley Street. The first tube railway in the capital, it was soon converted to a pedestrian walkway that itself went out of business once Tower Bridge opened.  It now carries telecom cables as well as the water mains.
Posted by Alan at Thursday, January 17, 2013
Email ThisBlogThis!Share to TwitterShare to FacebookShare to Pinterest