Celebrites Not Getting Out Of Here 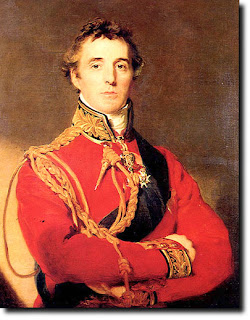 
Complaints have been made in the House regarding the news that one of the contestants on ITV's I’m A Celebrity Get Me Out Of Here is, or certainly was, a serving member for the Tories.
The show which, as far as I can make out, sees people of fame (past, present and hopefully future) spending time in a controlled sort-of jungle, being miserable. There’s an old one who just gets on with it, someone who shouts, some crying people, and a few bikinis that wash in a waterfall. Whilst this is probably not the sort of thing a Tory MP should be up to then at least in this case he’s probably not been planning to do much else otherwise. Formerly dead since the mid-19C, Sir Arthur Wellesley Duke of Wellington KG GCB GCH PC FRS is being vaunted as ‘guaranteed to put some dandy glamour into the camp’.
Wellesley, perhaps most famous as being the big-nosed beetroot constantly damning the eyes of Richard Sharpe, is reported as declaring to his fellow contestants ‘Hard pounding gentlemen,  let’s see who pounds the longest’, assuring all there that the contest had already been won on the playing fields of Eton. Where he explained they were very used to having grubs eat them, and of taking showers in tiny bikinis.
The Duke’s inclusion has been widely condemned by the internet, which has demanded to know what will happen if the French invade in his absence? Also that he’s overpaid, a bit foreign, and then a lot more about immigration and the unemployed for some reason. And that Dad’s Army should be shown again since Clive Dunn died.
Which it is, and has been for months, every Saturday night on BBC2.
Posted by Alan at Thursday, November 08, 2012
Email ThisBlogThis!Share to TwitterShare to FacebookShare to Pinterest